A major fire broke out on the afternoon of July 22 at the MTNL Exchange at Bandra west where over 200 employees work. 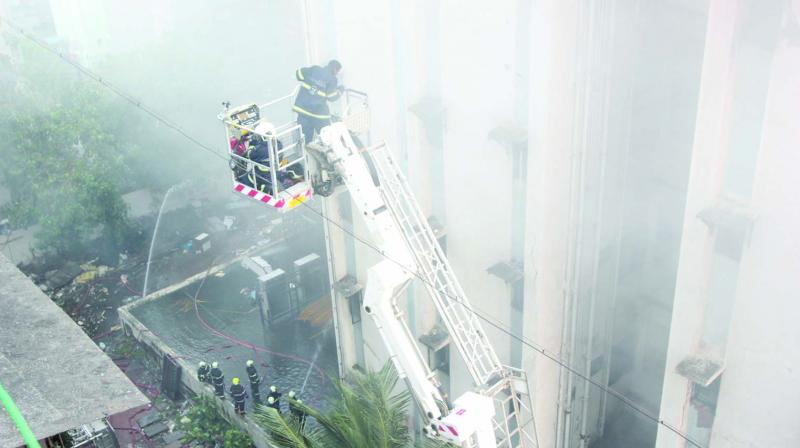 A major fire broke out on the afternoon of July 22 at the MTNL Exchange, Bandra west.

Mumbai: The Mahanagar Telephone Nigam Limited (MTNL) woke up to new trouble as the Mumbai Fire Brigade (MFB) registered an FIR against the authorities for deficiencies in fire safety measures in the building.

The MTNL management, meanwhile, suspended two of its senior officers at the Bandra telephone exchange for failing to maintain the firefighting system of the building despite the MEB serving notice last year.

A major fire broke out on the afternoon of July 22 at the MTNL Exchange at Bandra west where over 200 employees work. The fire brigade rescued 90 to 100 people. Although there were no injuries, it was a level IV fire and was doused after almost 24 hours. The fire affected 20,000 telephone connections in Bandra and it took a week for MTNL to resume landline and Internet connections.

The MTNL after the incident suspended senior manager S.D. Pandit-Rao and deputy manager R.B. Yadav. “There was a minor fire at the Bandra exchange last year after which a notice was served for non-functioning of the in-built firefighting system. Although the authorities fixed the system, they failed to maintain it. A fresh notice was served to them on July 29 for deficiency with regard to the firefighting system under the Maharashtra Fire Prevention and Life Safety Measures Act, and a first information report (FIR) was lodged with Bandra police station,” informed chief fire officer, P.S. Rahangdale.