The leopard cub was spotted behind a rock in the Yeoor forest Wednesday. 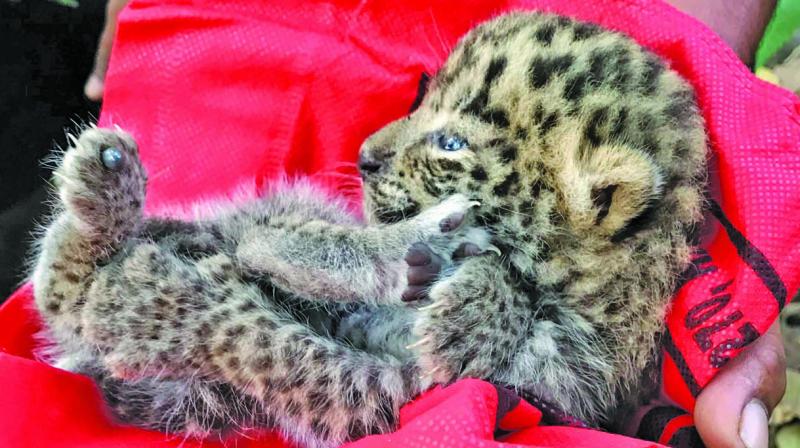 A file picture of the critical leopard cub.

Mumbai: The Thane forest department has decided to postpone search operations for the mother of the male leopard cub found in Yeoor forest on Wednesday.

The cub’s condition is said to be critical and only after it improves will the forest department make an attempt to reunite the 14-day-old cub with its
mother.

The cub is suffering from hypothermia i.e. an unusually low body temperature, and is being treated at a care centre in Sanjay Gandhi National Park.

According to a forest official, the cub seems to have got isolated in cold weather for two nights, due to which it caught infection.

“The cub is currently being treated, but its condition is very fragile. The cub needs to be placed at the site so that its mother recognises it and comes there. However, due to its critical condition, we are focusing on stabilising its condition first,” the forest official said.

According to Shailesh Pethe, wildlife veterinarian with the SGNP, the cub has developed severe chest congestion and is being given hot fomentation.

“We have been monitoring the area through patrolling and camera traps. The cub is only 14 days’ old. It needs its mother’s milk at least till it turns two,” said Jitendra Ramgaonkar, deputy conservator of forests, Thane division.

The cub was spotted behind a rock in the Yeoor forest Wednesday. The Yeoor Hills are a part of Sanjay Gandhi National Park, where leopard sightings are fairly common.

Morning walkers spotted the animal after they heard its feeble cries at an open gym.

Forest officials were alerted and the cub was sent to the animal hospital at Sanjay Gandhi National Park in the western suburb of Borivili for further care.

After medication, it was kept at the same site and its movements were monitored to find its mother.

The same night, a female leopard came to the spot where the cub was kept and sniffed it but did not carry it with her, the forest official said. On Thursday as well, the team was waiting for its mother but no female leopard was spotted, Mr Ramgaonkar added.