Bhima-Koregaon violence was a conspiracy: Opp

Congress MLC Sharad Ranpise has given notice for discussion on the violence. 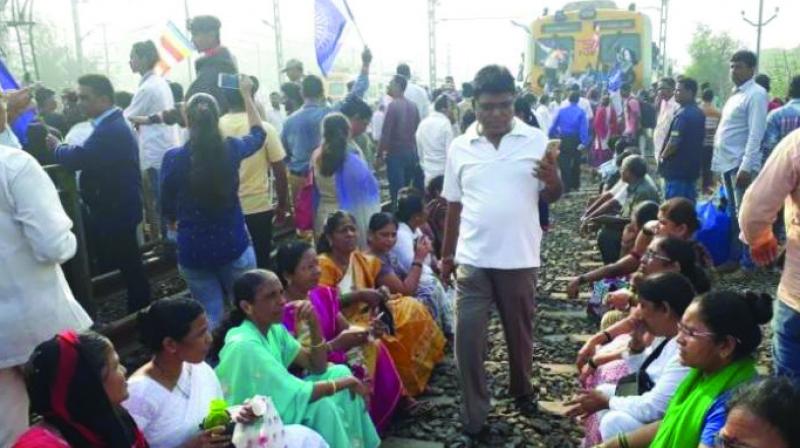 Dalits had gathered at Bhima-Koregaon in Pune

Mumbai: The violence that erupted in Pune’s Bhima-Koregaon area on January 1 rocked the Maharashtra’s Legislative Council on Thursday.

Opposition parties called it ‘a conspiracy to disturb the peace and social harmony’ of the state and alleged that it was supported by the government. They demanded strict action against the perpetrators of violence.

Congress MLC Sharad Ranpise has given notice for discussion on the violence. A large number of Dalits had gathered at Bhima-Koregaon in Pune district to pay tribute to the warriors of a historical battle between then ruling Peshwas and British 200 years ago. After the ensuing violence at the site of the battle, Ambedkarite and other progressive organisations called for a Maharashtra Bandh on January 3.

Terming the incident a blot, Mr Ranpise said, “Few upper-caste castiests supported by the government disturbed the peaceful gathering of Dalits. They are still roaming free and this government has no will to arrest them. It shows the mindset of this government against the downtrodden in the state,” alleged Mr Ranpise.

In her speech, NCP MLC Vidya Chavan said, “The events before January 1 regarding the programme at Bhima-Koregaon clearly show that the violence was planned and instigated by persons close to the BJP. This is the reason why the real perpetrators are not being caught. But 60,000 dalit youths from the state are being called for interrogation. This is misuse of power by the BJP.”

Calling the allegations unnecessary, BJP’s MLC Vijay Girkar said, “The government has controlled the violence successfully. But it should find out the people behind the violence. The conspiracy needs to be exposed before the people of the state.” He also demanded the revoking of cases on dalit youths. CM Fadnavis will reply to this discussion on Monday.