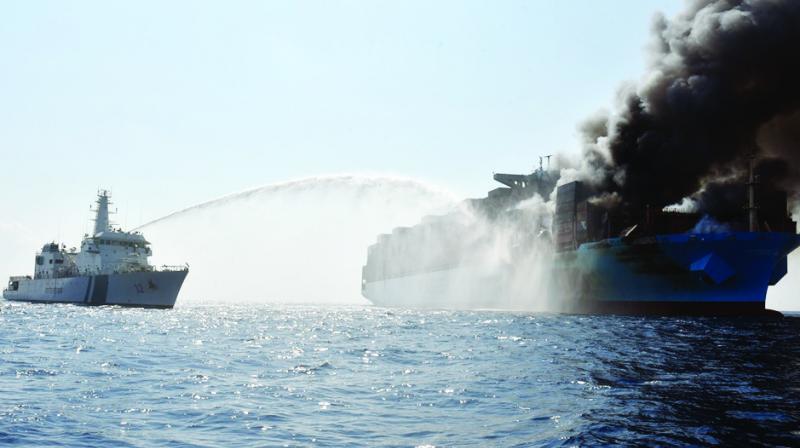 The fire started on a deck where chemicals were kept.

Mumbai: A day after a 330-metre-long Singaporean ship carrying chemical containers burst into flames following an explosion, the fire continued to rage on Thursday, melting the containers on it. One of the survivors succumbed to his injuries while three others are critical, said Coast Guard officials. Apart from the fire, poisonous gases were released on the ill-fated Maersk Honam.

Three of the crew of a merchant vessel that was assisting in salvage had to be put on interceptor boat to Trivandrum after they inhaled the poisonous gas emanating from Maersk Honam. The Coast Guard’s high-speed interceptor from container ship Ceres is 20 nautical miles from Trivandrum. MV Ceres is on the way to Cochin with 19 other survivors, as it is suspected that toxic fume poisoning has affected the entire crew of Maersk Honam. The three critical survivors from MV Ceres are Deepu Jayan, an Indian; Sukun Suwannapeng, a Thailand national; and Alan Rey Palca Gabunilas, a Filipino.  “Reports suggest that the ship was carrying a cargo of class of dangerous goods. The thick plume of smoke is toxic and the crew has been taken ill because of toxic gas inhalation. The Indian Coast Guard ship with doctors evacuated these patients as they were in need of immediate medical help,” said Avinandan Mitra, PRO Indian Coast Guard.

Maersk Honam caught fire on Wednesday around 390 nautical miles from India’s Agatti Islands at Lakshadweep. ICGS Shoor, which is at the site of the incident, is fighting the fire presently. A preliminary probe into the incident revealed that the fire started on one of the decks of the ship carrying the chemicals. Four crewmembers, including an Indian, are missing.