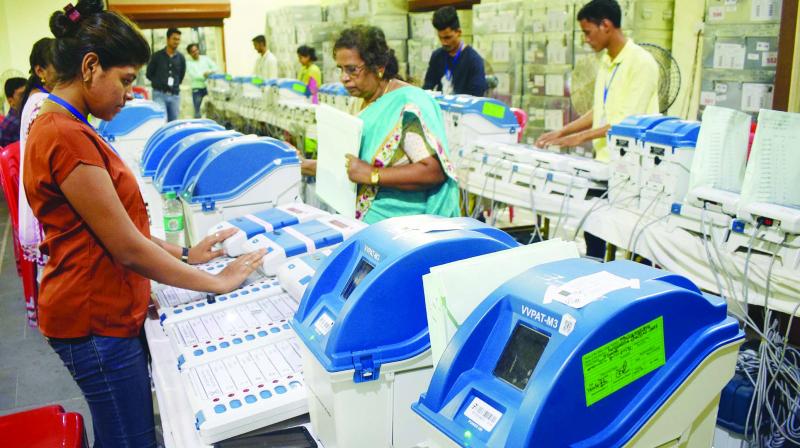 The ECI has nearly 38 lakh EVMs in its possession while the total number of EVMs supplied to it from 2000 to 2014 is less than 36 lakh.

Mumbai: A social activist has filed a public interest litigation (PIL) in the Bombay high court alleging that over two lakh electronic voting machines (EVM) in the possession of the Election Commission of India are unaccounted for. He has demanded investigation by an independent agency into it and sought that the use of EVMs  be stopped until the investigation is completed.

According to advocate Tanveer Nizam, his client Manoranjan Roy had filed various applications und-er the RTI Act and the replies received by him shows that there is a vast difference between the EVMs supplied by the two manufacturing companies to the ECI and the machines received by the ECI.

The ECI has nearly 38 lakh EVMs in its possession while the total number of EVMs supplied to it from 2000 to 2014 is less than 36 lakh.

While hearing arguments on the petition, the division bench headed by Chief Justice Naresh H. Patil observed that the issue raised in the petition is serious and the ECI and the government should not take it lightly.

The petitioner said that he has filed the petition in an attempt to prevent EVM fraud. He has stated, “The Election Commis-sion must consider alternatives to the EVMs as it can be tampered with and there is every possibility of its misuse.”

The petitioner has requested the court to issue directions for an immediate inquiry, action and investigation in this matter. He also demanded that the HC should take all EVMs into its custody till the case is investigated.

The court should pass necessary directions to the investigation agency to also probe into the loss of revenue to the state, the petitioner said.

The petitioner has alleged that only in 1989-1990, the figures of the numbers of EVMs supplied and received tally. But since year 2000, the supply and receipt figures never matched, he said.