Fadnavis also said that the BJP was of the view that the ticket be given to Srinivas Vanaga, son of late Chintaman Vanaga. 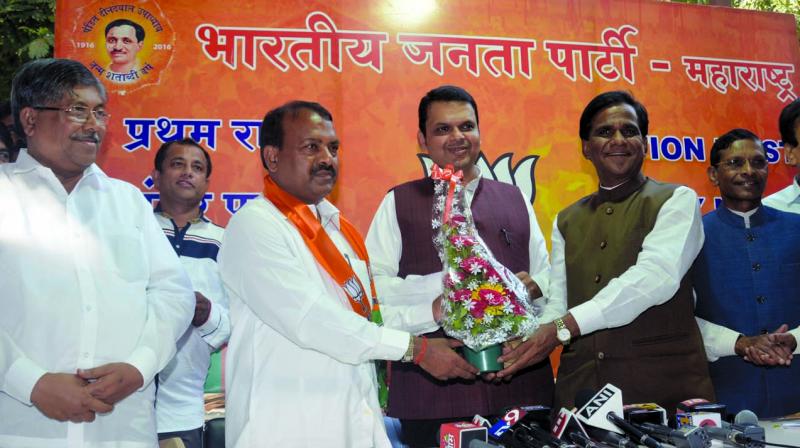 Mumbai: The BJP is embarrassed about not having its own candidate to contest the upcoming Palghar Lok Sabha (LS) by election, and having to give its ticket to an ex-Congress candidate instead.

The BJP’s Palghar unit will now have to work for Rajendra Gavit — who was till Wednesday afternoon a Congress leader — for the Palghar LS bypoll.

Chief minister Devendra Fadnavis tried to clarify that the BJP has 90 per cent MLAs and MPs from its own cadre and that there are only 10 per cent outsiders.

While welcoming Mr Gavit into the BJP, Mr Fadnavis said that leaders like the late Chintaman Vanaga and Vishnu Savara (currently a Cabinet minister in the Fadnavis government) had built the party in Palghar for the past 30 to 35 years.

However, when asked why so much organisational work could not produce a single capable leader for the Lok Sabha byelection, Mr Fadnavis sidestepped the question. “Our party has 90 per cent MPs or MLAs from our cadre base. But we have also welcomed 10 per cent people who have switched to our side looking at the work done by the PM and the party. The BJP has always respected and helped good political workers who join us from any party. So, the question of not having our own candidate does not arise,” he said.

Mr Fadnavis also said that the BJP was of the view that the ticket be given to Srinivas Vanaga, son of late Chintaman Vanaga. “The late Chintaman Vanaga’s son messaged me in general. I replied to him within five minutes and asked him to meet me. Still, he joined the Shiv Sena. I know who has mislead him and how. But if I say that right now, it will turn into a political issue. So, I will keep mum and speak when the time is right,” he said.