The lane that handles southbound traffic has been shut, as has the path towards Andheri (West) from Andheri (East). 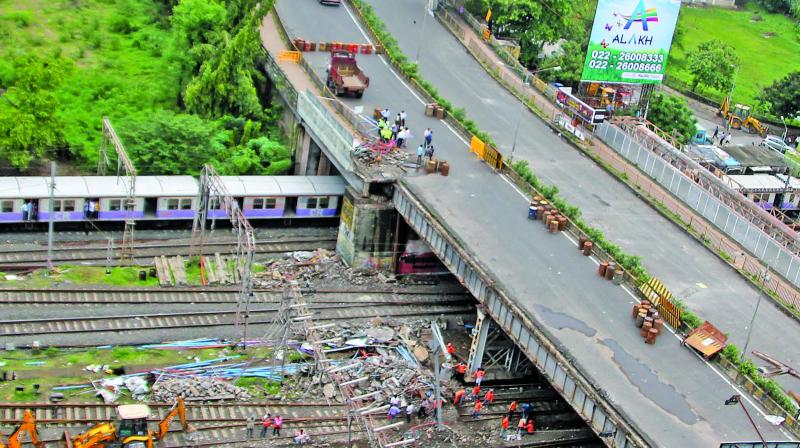 MUMBAI: Five days after the collapse of the pedestrian pathway of Andheri’s Gokhale Bridge, the road overbridge (ROB) was opened for vehicular traffic on Sunday. The traffic police on Sunday issued an advisory, saying that it was being opened up for northbound light motor vehicles. Heavy vehicles have been banned.

The advisory also said that heavy vehicles should either follow Milan Flyover or Thakre Flyover. Commuters travelling from the International Air-port have been asked to take a u-turn below Centaur Flyover before the Vile Parle junction.

Meanwhile, the Vasai rail overbridge, connecting the east and west, was shut down by police on Saturday night after the Western Railways (WR) shot off a letter to the Vasai Police and public works department about the ROB being unsafe.

The Central Railways (CR) also closed a pathway of the ROB, which connects LBS Marg in Ghatkopar (West) to the Eastern Expressways in Ghatkopar (East).

The pathway of the ROB at the Vikhroli-end is overburdened with 400 mm thickness of paver blocks, and utility services like power and telephone cables, etc. The shutdown of the ROB led to woes for motorists.

The WR has also closed down the skywalk portion between the BMC FOB in Malad, connecting to the Railway FOB on Saturday night.  Subhranshu Dixit, a traveller to Sakinaka, said: “When I reached the Ghatkopar ROB to go to Sakinaka, I found it closed, and I had to reverse to Kanjur Marg. I wasted an hour.”