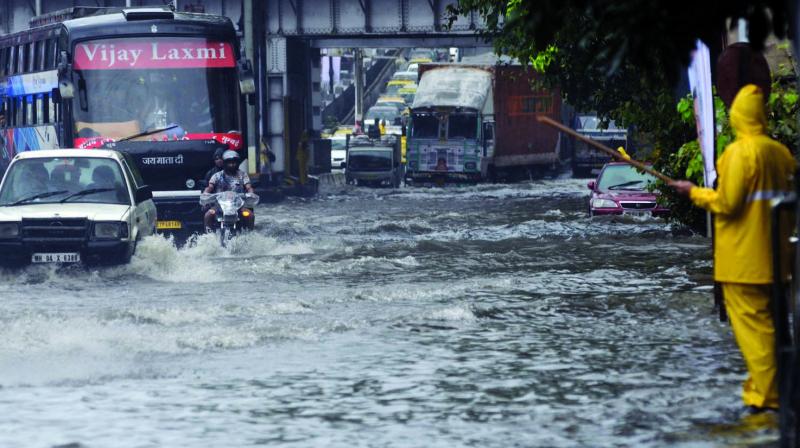 Mumbai: Heavy rains, which began on Saturday, continued to lash Mumbai on Sunday, leaving several parts of the city waterlogged. Between 12 am and 3 pm on Sunday, the city area recorded the highest rainfall at 187mm at Brihanmumbai Municipal Corporation (BMC) office in Fort, with Colaba and Sewri recording rains at 167mm and 158mm respectively.

Water-logging was reported at Vikhroli, Hindmata, Chembur and Kurla where traffic was disrupted as cars were submerged in the water.

The IMD has attributed the heavy rains to north westerly to westerly winds over coast, enhancing rainfall over North Konkan including Mumbai, Thane and Palghar. Meanwhile, a portion of the three-storeyed Bhushan Bhavan building collapsed at Halao Pool in Kurla area, Fire Brigade and police were present at the spot. No injuries were reported.

Areas like Parel, Gandhi Market, Sion and Antop hill too reeled with water-logging issues as citizens were seen wading through knee-deep water. According to BMC, around 111 de-watering pumps were being operated including six major pumps in the city.