Nearly 17 lakh employees are on strike to press for various demands including implementation of the seventh pay commission. 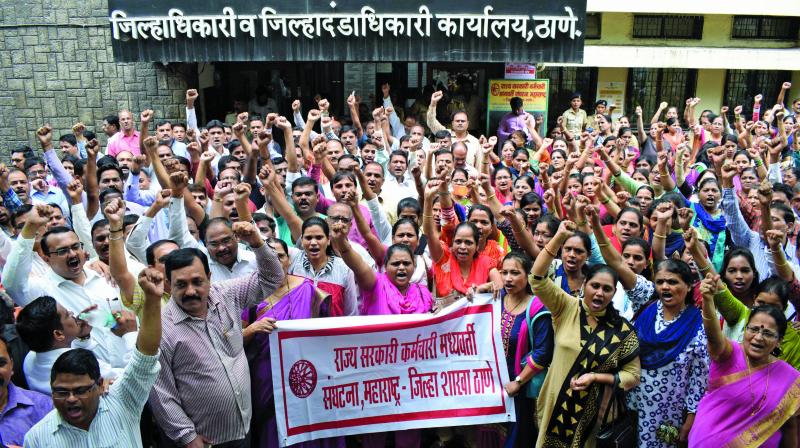 The protesters in Thane, on Wednesday.

Mumbai: The state government employees’ strike continued into the second consecutive day as per their announcement. Nearly 17 lakh employees are on strike to press for various demands including implementation of the seventh pay commission.

While the state government has claimed that the strike has had no impact on regular activities, unions are claiming that the protest has been completely successful so far. Thursday will be the third and last day of the strike.

Grade three and grade four employees of the state government; teachers; zilla parishad (ZP) employees from different districts; and government hospital employees are participating in the three-day strike which began this Tuesday.

The protest is to press for various demands including implementation of the seventh pay commission, a five-day week, clearance of dearness allowance and recruitment of 1,85,000 vacant posts.

However, to press further for their demands, the Maharashtra Rajya Sahakari Karmachari Madhyavarti Sanghatana (MRSKMS) has given the call for the strike. Avinash Daund of MRSKMS said, “Our agitation has pushed the state government to issue two GRs. By that token, the strike has been successful. Also, almost all employees have participated in this strike.”

Meanwhile, the state government on Tuesday claimed that the strike had no impact on regular services. Shiv Sena chief Uddhav Thackeray said, “State government employees are not protesting without a reason. They are fighting for their rights. Today, farmers and government employees in Maharashtra have taken to the streets. This should not be seen as a mere protest but it should also be seen as a fight for their rights.”