250 families comprising of 390 members have been shifted drom Pryag Chikhali village of the Karvir Taluka. 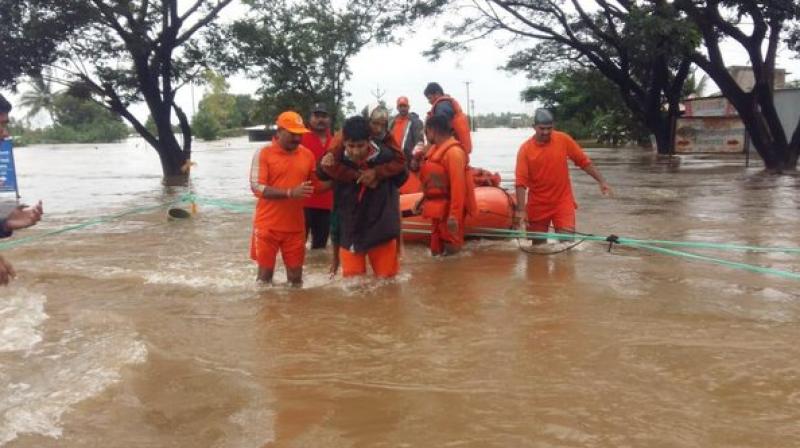 Since the rising water level could cause flood in the area, the local administration has shifted 97 families comprising of 375 members from four villages of Shirol Taluka to safer places. (Photo: ANI)

Mumbai: Heavy rains in Kolhapur district have led to an increase in the water level of Panchganga River, which reached 39 feet on Sunday evening.

Since the rising water level could cause flood in the area, the local administration has shifted 97 families comprising of 375 members from four villages of Shirol Taluka to safer places.

Around 250 families comprising of 390 members and 450 cattle have also been shifted from Pryag Chikhali village of the Karvir Taluka .

Moreover, an alert has been issued by the administration.  From Shirol taluka, families living in Gothanpur (Kurundwad), Rajapur, Rajapurwadi and Khidrapur villages has been shifted.

According to the sources from the Kolhapur, it is raining heavily in the district since last four days.

As the Panchaganga River started overflowing, water has been released from the Radhanagari and Koyana dams as there is a possibility of flood like situation in Kolhapur.

The Karnataka government on Sunday increased the water discharge from the Almatti Dam on request of Maharashtra.

Rise in water levels of rivers coupled with flow of water from the dam is believed to be the cause of the last month’s devastating floods in Kolhapur and Sangli districts.

On the request of the state government, the Karnataka government has increased the discharge from the dam from 1,70,000 cusec (cubic foot per second) to 2,20,000 cusecs, according to an official from the office of Maharashtra chief minister.

Almatti dam is a hydroelectric project on the Krishna River located on the border of Bijapur and Bagalkot districts in north Karnataka, around 200 kms from Sangli and Kolhapur.