Praying to their deity Waghoba, the tribal protesters said that the metro car shed project at Aarey is against the voice of the people. 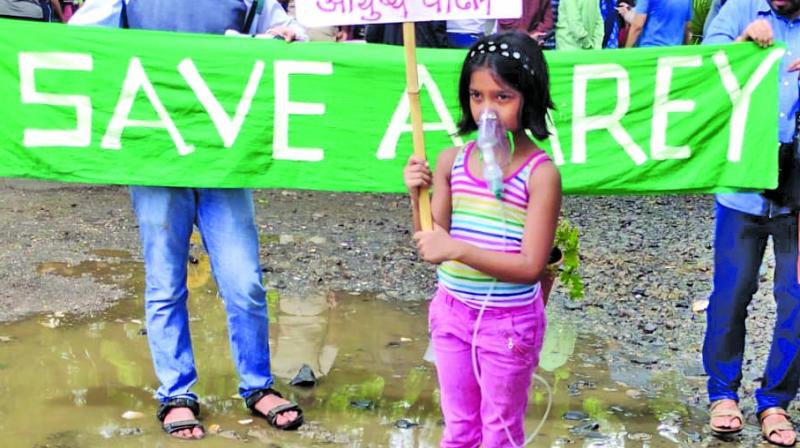 Mumbai: Thousands of citizens, including local tribals, gathered at Aarey Milk Colony on Sunday to protest against the Tree Authority’s decision to sanction the removal of 2,646 trees to build the metro car shed.

Tribals from 27 hamlets of Aarey urged National Congress Party (NCP) leader and Baramati MP Supriya Sule, who visited the site on Sunday, to save the city’s last ‘green lung’.

“Aarey Forests are the lungs of Mumbai and provide the city the pure air we breathe. I strongly oppose the cutting down of trees here. We have to save the Green patches in Mumbai for our future generations, (sic)” tweeted Ms Sule.

While activists welcomed Ms Sule’s stance on the issue, many also highlighted that NCP corporator Kaptan Malik had earlier voted for the proposal during the August 29 Tree Authority meeting.

“I will seek clarification from Mr Malik. The NCP is clearly against large-scale cutting of trees in Aarey,” said Ms. Sule.

Praying to their deity Waghoba, the tribal protesters said that the metro car shed project at Aarey is against the voice of the people.

“While we will lose our livelihood due to the car shed, Mumbaikars will also bear the brunt of destruction of the environment,” said Prakash Bhoir, a local tribal.

The protest also saw politicians cutting across party lines lending their support to the locals.

“It is time for political parties to come together to save Aarey. It is an urgent matter of Mumbai’s environment which is why the Shiv Sena has been vocal about preserving Aarey,” said Stalin Dayanand, Project Director,