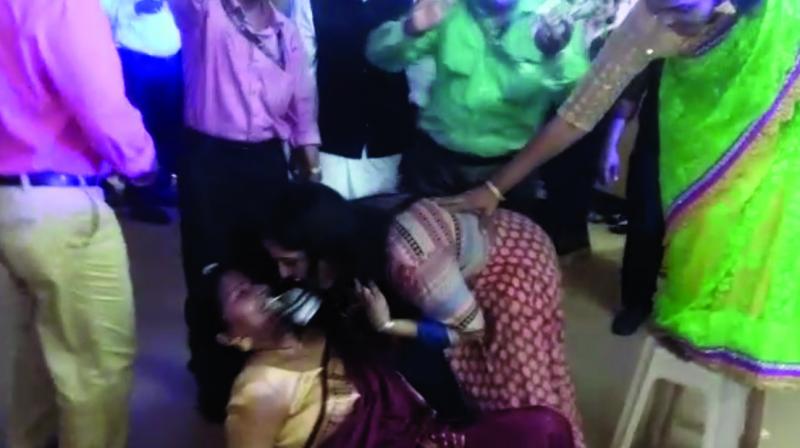 A grab of the video shows some BEST women employees clutching Rs 500 notes in their teeth.

Mumbai: Letting their hair down as part of an annual cultural programme held by the Brihanmumbai Electric Supply and Transport (BEST) proved costly for 11 BEST employees, including Marathi actor Madhavi Juvekar, after the undertaking served them notices for “misbehaving” and “dancing in an indecent manner” at the event.

The undertaking said their conduct is inappropriate for a BEST employee. In a video that went viral on WhatsApp on Wednesday morning, the 11 were seen dancing with Rs 500 notes, apparently at a function held at Wadala depot on Dussehra day on September 29. The video took almost a month to come out as it began to be shared only on Tuesday.

Ms Juvekar is known for featuring in the Marathi movie Blackboard and stand-up comedy series Phu Bai Phu. She works as a clerk at the Wadala depot of BEST.

On being contacted by The Asian Age, Ms Juvekar said that the money was fake and the dance itself was a part of the undertaking’s cultural programme.

The BEST has served notices to all the 11 employees that are seen scattered in the video under the rule that such behaviour is unbecoming of a public servant. BEST chief public relations officer Hanumant Gophane said, “The 11 individuals including Ms Juvekar have been chargesheeted as the incident has occurred on BEST’s premises and that this behaviour by public servants is not acceptable.”

On the other hand, Ms Juvekar has defended the incident and said the money being used is not of the BEST and that the dance was a part of the Kutchi dance form. She said, “The money is fake, so it’s not like we have taken the undertakings money and done the dance.”

She further added, “The dance was a part of cultural programmes that take place every year. Last year it was wedding themes and this year it was the various dance forms in the country. We dance the garba from Gujarat and there is a specific dance from the Kutchi people that involves balancing money on one’s forehead or even hips and we have only enacted that.”

BEST union leader Shashank Rao distanced himself from the controversy when asked if the union will take action against the workers seen in the video. He said, “I don’t have the details so I will not comment about the incident prematurely.”

Mr Rao’s union had called off the strike that had been announced demanding Diwali bonus three weeks before the incident occurred. The strike was called off following intense negotiations with the management. The management then promised a bonus of Rs 5,500, in addition to their salaries that were given in September.