The committee will conduct special hearings, pass necessary directions and monitor the implementation of such orders. 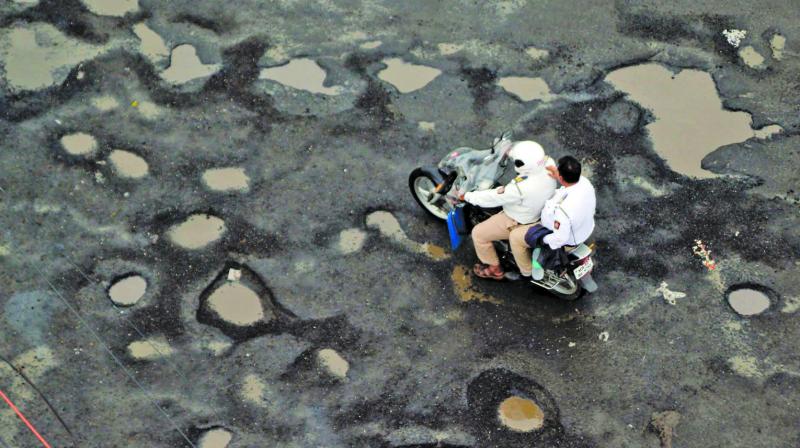 The Chief Justice said the local ward officers in each district of the state must identify all roads in need of repair and inform the secretary of the Maharashtra Legal Services Authority (MLSA) of the same. (Photo: File)

Mumbai: The Bombay High Court on Thursday constituted a two-member committee to look into the repair and maintenance of roads in Maharashtra, observing that despite its several orders, the civic authorities failed to fix potholes and bad roads.

Chief Justice Manjula Chellur said that while the HC did not wish to run the administration for the state government, it felt compelled to interfere in cases where the local authorities failed to discharge their duties.

Despite several benches of the HC having passed detailed orders on improving the condition of roads in the city and elsewhere in the state, and on the urgent need to repair potholes ahead of each monsoon season, the civic bodies had done little to ensure their implementation, it noted.

The common man continued to suffer and each monsoon season brought along tales of civic apathy and public distress in the city, Chief Justice Chellur observed.

She also referred to the death of Dr Deepak Amrapurkar of Bombay Hospital in August this year, after he fell into an open manhole while wading through waterlogged roads to get back home from hospital.

"You (litigants and lawyers) ask for wonderful orders and we pass them too but what is the use if none of our orders are ever implemented. Despite one such detailed order (directing authorities to urgently repair potholes and improve the condition of roads in the city) the doctor still died," Chief Justice Chellur said.

"Try to imagine the state of mind of the common man who is trying to reach home, or to take a loved one to the hospital in heavy rains. You can't expect him to remember to be careful of potholes in such a situation, it is not easy. So the best thing is to avoid such circumstances and keep the roads in good condition," she said.

The problem of potholes and bad roads was not limited to Mumbai but was common across the state, the bench said. The Chief Justice said the local ward officers in each district of the state must identify all roads in need of repair and inform the secretary of the Maharashtra Legal Services Authority (MLSA) of the same.

The MLSA's secretary in-turn will prepare a report on the condition of roads, the need for repair, steps taken by civic bodies concerned and submit the same before the two-member committee.

On the last hearing on August 3 this year, the high court had appointed the MLSA secretary as the nodal officer to receive grievances related to bad roads and potholes from the public and ward officers across the state.

The court was informed today that since the last hearing, the MLSA has only received 180 complaints from citizens.

The bench directed MLSA to publicise the formation of such a nodal authority and to encourage citizens to share their grievances and complaints of bad roads. "I personally do not even commute on these roads that are potholed or in need of repair. But I have to take up the cause for the common man," she said.

"It is the duty and the obligation of the local authorities to repair and maintain roads. But when they fail to discharge this duty, this court feels very unhappy and is
forced to interfere," she further said.