The Indian Navy has received calls from a few companies interested in setting her back in shape. 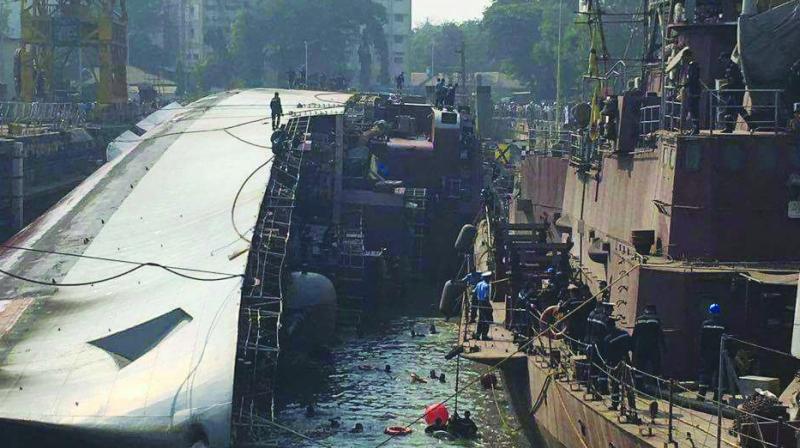 Sources from the Naval dockyard said as of now, 25 per cent of the ship is flooded.

Mumbai: Following flooding of the 3,850 tonne guided missile frigate INS Betwa while she was on dock for repairs on Monday, the Indian Navy has received calls from a few companies interested in setting her back in shape. This was revealed by Navy sources who further said that presently, discussing project cost and timing was irrelevant as evaluation was in progress and it would take time.

About the proposed revival, a senior official from Navy said, “We have not approached anyone yet but a few companies have informed us that they are interested in inspecting the ship now.” He said that the Navy was in the process of evaluating damage caused to the frigate. “The inquiry team is checking whether standard operating procedure was followed or not at the time of undocking,” the official said.

Another top Navy official told The Asian Age that the process of evaluation of damage was underway and would take time. “As of now, we can’t say whether we will be able to salvage INS Betwa…”

Sources from the Naval dockyard said that at the time of the incident on Friday, only 10 per cent weapons had been installed, and till late night Wednesday, divers were checking positions of the dock below the frigate before making it stand again. “As of now, 25 per cent of the ship is flooded,” they said. They informed that making INS Betwa stand again was the Navy’s main focus for now as with her lying down, other ships could not enter the CG dock area where she was stuck.

Authorities were planning to fill the dock with water using hi-power pumps to get INS Betwa afloat, sources said. “It’s a very crucial practice, and we need to be careful while performing it to ensure safety of the frigate,” they added.