To make women financially self-reliant, the committee had given a nod to purchase 170 sewing machines. 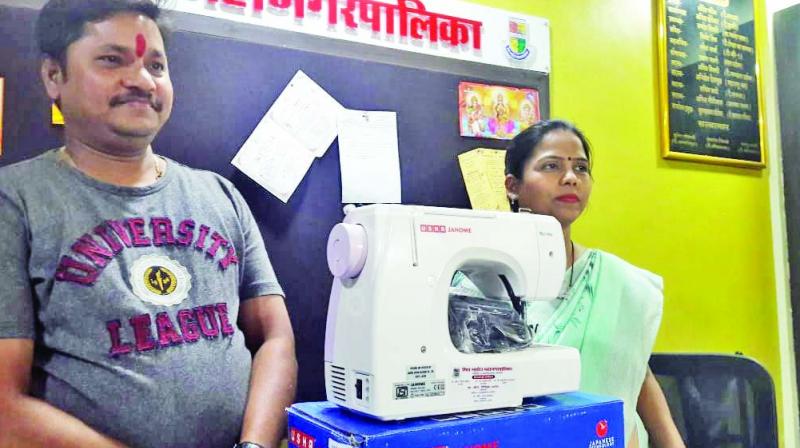 Kusum Gupta with the sewing machine.

Mumbai: Always in the news — mostly for the wrong reasons, skeletons keep tumbling out of the Mira Bhayandar Municipal Corporation’s (MBMC) closet at regular intervals.

Shiv Sena corporator- Kusum Gupta dropped a bombshell by alleging a scam in the purchase of sewing machines by the Bharatiya Janata Party-led women and child welfare committee (WCWC).

To make women financially self-reliant, the committee had given a nod to purchase 170 sewing machines. The tender procurement process was followed, but surprisingly the automatic sewing machines which are available in the retail market for Rs 6,800 (per unit) were purchased in bulk at the rate of Rs 11,600 (per unit).

“Interestingly, the finalised purchase price is much higher than the printed maximum retail price.” charged Ms Gupta who has also submitted relevant evidence to prove her point, while demanding action against those who were responsible in creating a dent in the civic treasury by facilitating extra benefits for the supplier in exchange of kickbacks.

While municipal commissioner- Balaji Khatgaokar assured to probe the matter and take action in accordance to rules, his deputy, Dr. Sambhaji Panpatte claimed that the entire procurement process was transparent and work orders were issued to the lowest bidder.

“However, we will investigate the allegations leveled by the Shiv Sena corporator.” he added.

According to civic officials, so far, 130 out of the 170 sewing machines had been distributed free of cost to needy women in the twin-city under the aegis of the committee which was headed by BJP’s Dipika Arora and also had whistle-blower —Kusum Gupta as one of the members on-board.