Ex-cricketer Kapil Dev addressed auto drivers at an event in Thane on Monday, where he exhorted them to comply with traffic rules. 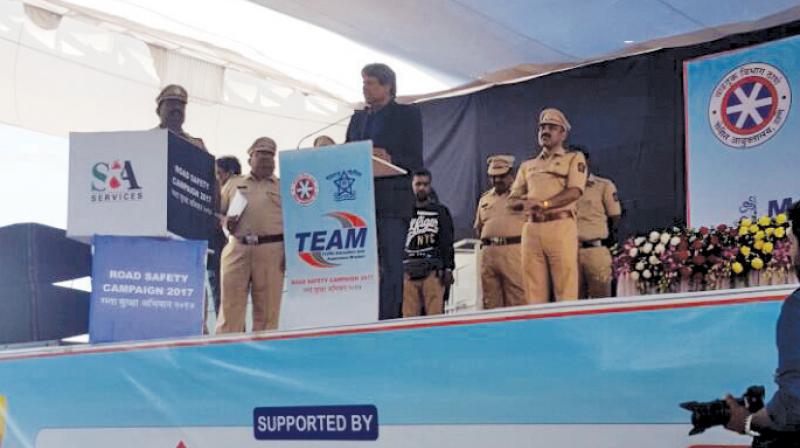 Kapil Dev at an event in Thane on Monday.

Mumbai: The Thane traffic police has roped in former captain of the Indian cricket team, Kapil Dev, to improve the civic sense of auto rickshaw drivers and increase their compliance with traffic rules. Meanwhile, a few rickshaw drivers who have excelled at their work were felicitated in Thane on Monday.

In his address to rickshaw drivers who attended the event, Mr Dev said, “You have to drive carefully and sensibly. If you are not driving sensibly, you are putting at risk the lives of passengers as well as your own family members. You should not drive in a drunken state or rashly. You should abide by rules of the traffic police. You have to be more cautious as a responsible driver and a responsible citizen of India.”

Thane traffic police DCP Sandip Palve told The Asian Age, “To spread awareness and set a benchmark for rickshaw drivers, we have encouraged them to take a pledge of good behaviour wherein they will drive with care and ensure the safety of passengers.”

DCP Palve said, “On this occasion, we distributed 1,000 smart cards among rickshaw drivers, which carry their personal information such as residential address, vehicle registration number and phone number, so that customers know who their driver is.”

According to a source, the police distributed uniforms to 200 rickshaw drivers and felicitated 13 rickshaw drivers who had performed commendable acts such as returning luggage left behind by passengers, rushing patients to hospitals and so on.