The value of damage of standing crops excluding that of grass worked out to be Rs 32 lakh. 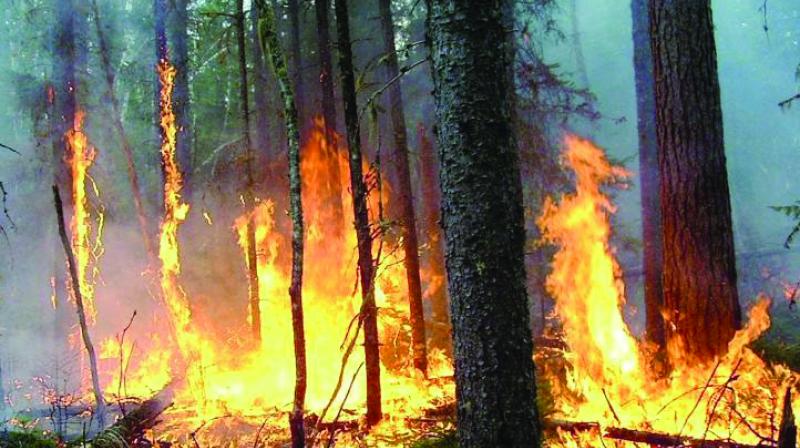 Fire incidents in Maharashtra forests last year were 4,675 against 3,888 in the preceding year.

Mumbai: The number of forest fire cases in Maharashtra increased by 20 per cent, as per the latest report of 2016-17 by the state forest department.  Fire incidents in Maharashtra forests during the period were 4,675 against 3,888 in the preceding year's report of 2015-16.

Forest department officials have claimed that, particularly in Mumbai and Thane, fire incidents are largely from deliberate attempts though the report suggests that a large number of fire cases over the state were due to either natural causes or accidents.

“The forests across Mumbai and Thane are not the type where natural fires could occur, in terms of density and environment. The fire incidents in these areas are man-made to a greater extent. We carry out regular fire drills, but it does not prevent deliberate fire incidents,” said Jitendra Ramgaonkar, chief conservator of forest, Thane.

However, in order to tackle the issue of man-made fires, the forest department is planning to come up with a compound wall around the vulnerable forest spots. “The plan is currently in the initial stage,” said Mr Ramgaonkar. Around Rs 4.5 crore will be spent on the wall’s construction.

The value of damage of standing crops excluding that of grass worked out to be Rs 32 lakh. An expenditure of Rs 3,381.44 lakh was incurred on fire and forest protection programmes during the year.

The Maharashtra forest department is coming up with an assets-monitoring system where near real-time tracking of the state’s forest will be done.

Through the initiative, incidents of fire, encroachments and illicit cutting in forest and mangrove areas can be monitoring through satellite imagery, with intervals of 15 days initially, according to Praveen Srivastava, additional principal chief conservator of Forest, information and technology cell, Nagpur.

The system is expected to be operational with the forest department by May 2018.