Students from grade four to 10 are involved in the club and every class student’s will get to learn according to their respective curriculum. 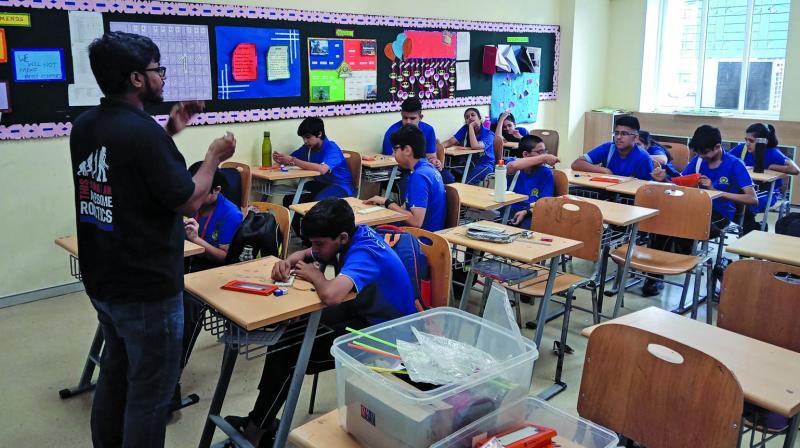 Students trying their hand at robotics.

Mumbai: In a move to activate student’s technological creativity and new possibilities, C.P. Goenka International School have introduced 3D printing and robotics as a part of their design club, which will be conducted after school hours. Through this new initiative, students are getting a chance to make their own personalised prototypes, designs and other products while focusing on subjects like Science and Mathematics.

While explaining about the mechanism of the initiative, Archana Goenka, trustee and academic director of the school said, “Teachers cannot explain all the lessons and topics on blackboard or even 2D. For example, it can’t be told how a human heart functions but it can be created to experience. With 3D printing and robotics, students are getting a chance to create an object and play around with it while understanding at the same time.”

Students from grade four to 10 are involved in the club and every class student’s will get to learn according to their respective curriculum. “If today, grade four students studied about light and electricity, the same will be shown to them, practically, in the laboratory after school,” Ms Goenka explained.

The school is making sure that every student gets what they are interested in. In case, a student doesn’t want to take up mathematics or engineering but is interested in arts, the lab has a 3D doodling for them. “Each and every student has a personalised interest. While some like robotics, some are into making new device or prototypes (which falls in engineering). Meanwhile, some students like doodling or painting. Our aim is to give them what they like, with a bit of visual effect and a perspective. This will also brief them for their future career,” Ms Goenka said.

Furthermore, interestingly, a group of students came together and made a ‘fire alarm system’ in the robotics laboratory using the prototype and devices.

“The students learned about sound, resistance and designed a prototype of fire alarm system which we installed in the school premises because it was that good,” she added.