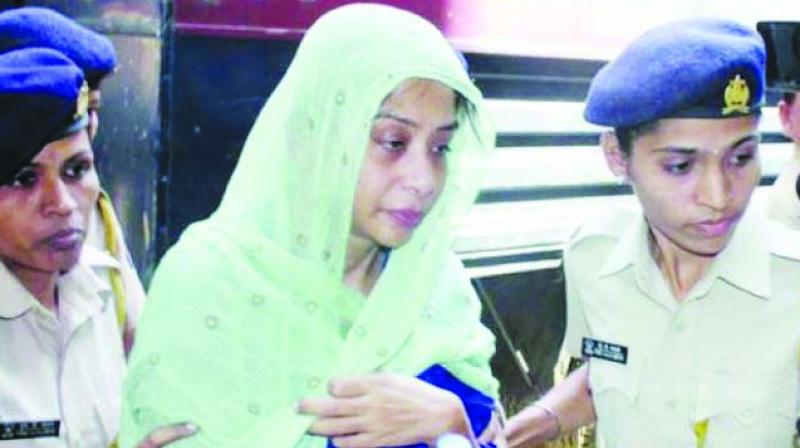 File picture of Indrani Mukerjea with the police.

Mumbai: A day after Indrani Mukerjea — a key accused in the April 2012 Sheena Bora murder case lodged at Byculla’s women’s prison —  was rushed to JJ Hospital in a drowsy state, the state prison officials have ordered an internal enquiry to find out the cause of her ill-health. The probe will be conducted by Rajvardhan Sinha, Inspector General (Prisons), whose office is located in the same premises of the women’s prison in Byculla. It is still unclear if her condition was a result of any drug overdose, said prison officials.

At the prison, the jail staff administers her medications for depression, hypertension and clotting of blood. Prison officials said the drug overdose angle is not yet confirmed and added that only the final medical reports from the JJ Hospital will help in establishing the facts.

“We have not been informed of any overdose of medicines by the hospital, yet. While she is under medication for three different conditions (depression, hypertension and clotting of blood), it is unclear if either of these medicines were administered in excess quantity,” said a senior state prisons officer.

As part of the internal probe, the footage of the CCTV camera covering her cell will be scanned for anything suspicious. It will also help the officials check if any medicine was given to her in excess.

Also, the statements of all the prison staff who catered to Mukherjea will be recorded. The police will also investigate if there was any foul play while she was being escorted to and from the court.

Prison officials, however, said that they are relying more on the final reports from the hospital and the chemical analysis to give clarity about the cause of the situation. “The
discharge of Indrani Mukherjea and her final medical reports will be key to the probe,” added the senior state prisons officer.

The officials said that there was a team of escort who would take the inmate to court and bring back and another to keep a watch on her inside the barrack and to administer her medicines.

The probe report will be submitted to B K Upadhyay, Additional Director General of Prisons.

The urine report of Indrani Mukerjea was issued by the Hinduja Hospital on Monday. The report revealed that there was heavy presence of anti depressant Benzodiazepine. This is in tandem with the earlier report of JJ Hospital which mentioned a possible drug overdose leading to the health emergency.