BMC claims it is a measure to regulate the natural flow. 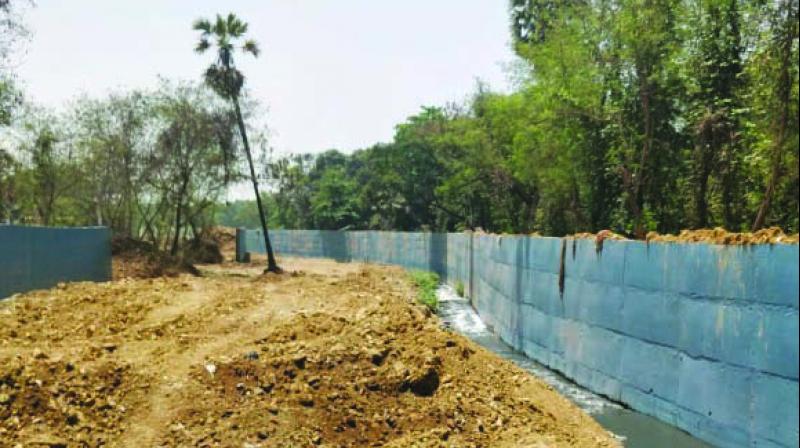 BMC said that it is being done as part a river rejuvenation project.

Mumbai: The Oshiwara river tributary in Aarey Milk Colony is being subjected to concretisation, thanks to walls being built by the BMC, alleged environmental activists.

An NGO Vanashakti has written to the state government, the Brihanmumbai Municipal Corporation (BMC) along with other government bodies on Monday stating that massive walls are being built on both sides of the Oshiwara river ‘inside’ a forest, which may not only degrade the river stream but also dry up the trees in the forest.

Confirming the erection of the walls, the BMC said it is being done as part a river rejuvenation project and also to thwart littering into the stream.

Stalin Dayanand, a project director with the NGO, stated that the riverbed is being filled up with mud and rubble. “Concretisation work like this would only lead to destruction of river and forest and would open up the land for developers. We fail to understand how is the civic body carrying out construction work of retaining wall inside forest. There are no human settlements inside the site of Aarey Colony that may be in the risk of flood. In the garb of rejuvenation, they have filled almost 400 meters of the river,” said Stalin Dayanand.

“There was a bridge across the Oshiwara river which had collapsed some months ago. That river is being walked in and filled up. They are cutting the second tributary, which comes from the other side also. While it has nothing to do with metro car shed, what none of us realised is that Aarey is the source of Oshiwara river,” added Mr Dayanand.

The storm water drains department of BMC stated that the retaining wall is being constructed across all the rivers of the city. “The BMC is constructing retaining walls across all stretches of Oshiwara river. It is to channelise the water and regulate its natural flow,” said VH Khandkar, Chief Engineer, SWD department, BMC.

The Central Pollution Control Board has identified 49 polluted stretches of rivers in Maharashtra. Mithi river in Mumbai, Mula-Mutha in Pune and Ulhas in Ambernath  among others are the 'most polluted' river stretches.