Mumbai gets highest rainfall of season

Mumbai has received 54 per cent rainfall of the entire monsoon season in just the last 20 days, said BMC officials. 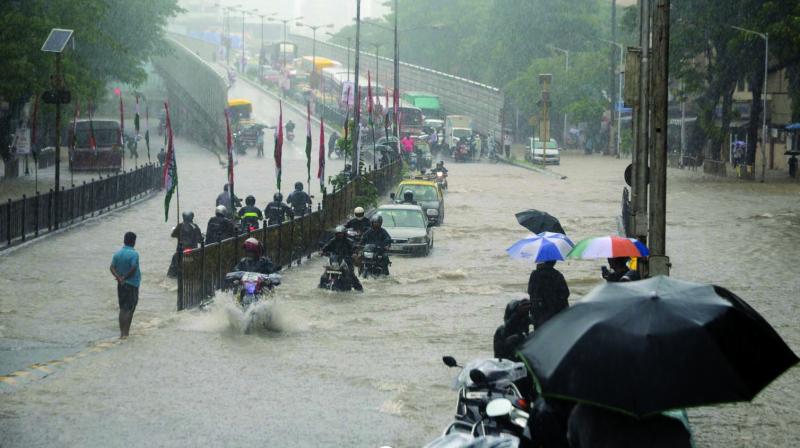 Traffic was disrupted in Hindmata, Parel, as a heavy downpour lashed several parts of the city, on Monday. The city received the heaviest rainfall of the season and torrential rains have been predicted for the next 24 hours. A holiday was declared across city schools, on Monday. (Photo: Shripad Naik)

Mumbai witnessed the highest rainfall of the season in 24 hours since 8.30 am on Sunday till 8.30 am on Monday, according to the Indian Meteorological Department.  The Colaba observatory in south Mumbai recorded 170.6mm rainfall in the given period.   The observatory in suburban Santacruz recorded 122mm showers during the same period.

As per IMD officials, on Saturday, heavy rains were recorded in Mumbai city areas compared to suburbs.

However, on Sunday night, rainfall picked up pace in the suburbs too. Officials of the IMD have stated that continuous rains are expected on Monday and Tuesday.

“On Monday, the entire city received widespread rainfall. In the last 24 hours, all areas except two to three places recorded rains higher than 100mm. Mumbai recorded the highest rainfall for this season,” said an IMD official.

Mulund (east) and Goregaon recorded the highest rainfall in the last 24 hours at 186.8mm and 186mm respectively.

On Monday, between 8.30 am and 5.30 pm, Colaba observatory recorded 104.8mm and Santacruz  recorded 75.9mm of rainfall. Meanwhile, a woman was crushed to death by a bus after her bike hit a pothole.