In his testimony before the additional sessions judge Anand Yawalkar, Mr Hazare stated that he knew Patil as an elected representative. 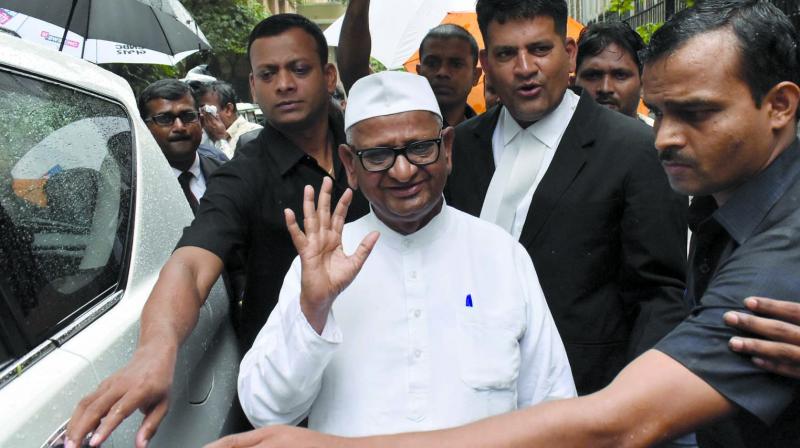 Mumbai: Renowned activist Anna Hazare on Tuesday appeared before the sessions court as a prosecution witness in Congress leader Pawanraje Nimbalkar’s murder case and recorded his statement. Nimbalkar was murdered in 2006 in Kalamboli, Navi Mumbai and the prime accused, former NCP MP Padamsinh Patil and others, are facing trial in the case.

Mr Hazare told the court that he came to know about Nimbalkar’s murder and a shooter had been given a contract to kill him through news media reports.

In his testimony before the additional sessions judge Anand Yawalkar, Mr Hazare stated that he knew Patil as an elected representative. He further stated that there were allegations of corruption against Patil and hence, he protested against Patil. According to him, following protests, the government formed a commission under retired Supreme Court judge P.B. Sawant to enquire into the allegations of corruption against Patil after which Mr Hazare was allegedly threatened.

“Later, I came to know through media reports about Nimbalkar’s murder as well as the news that a contract to kill me had been given to a shooter,” said Mr Hazare, adding that following this he registered a complaint at the Parner police station. Mr Hazare stated that before filing an FIR he had informed Prime Minister Narendra Modi and the state chief minister about the threat to his life but no action was initiated, because Patil is related to NCP chief Sharad Pawar.

However, the defence lawyers took an objection to his statement, saying it was not relevant to the case. Hence the judge recorded Mr Hazare’s statement.

Mr Hazare appeared before the court as a prosecution witness after the Supreme Court set aside an order of the Bombay high court rejecting Nimbalkar’s widow Anandidevi’s plea seeking to examine Mr Hazare as a witness.

Initially, the prosecution had dropped Mr Hazare as witness after Patil had opposed the examination of Mr Hazare as a witness saying his statement exhibited that his claim was based information he had heard and that is inadmissible in the law.

Patil further contended that Mr Hazare’s evidence would not in any manner help the prosecution prove any charge against him and the other accused.

Anandidevi had challenged this decision in the HC, which rejected her application last year saying it has not found anything to show that Mr Hazare’s evidence would be of any use in the case. Following this she moved the SC, which allowed her plea and directed the Central Bureau of Investigation (CBI) to make Mr Hazare a prosecution witness in the case.