The BEST bus strike on Monday for the rights of 36,000 workers has cost the undertaking more than it thought it would. 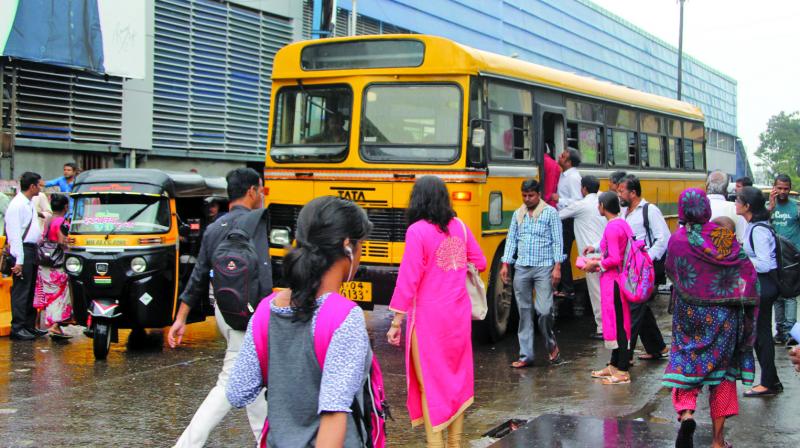 Commuters boarding private buses on the day of the strike. (Photo: Mrugesh Bandiwadekar)

Mumbai: The Brihanmumbai Electric Supply & Transport (BEST) lost 90 per cent of the revenue it would have otherwise earned on a weekday due to the loss of 16 hours in the strike. The BEST bus strike on Monday for the rights of 36,000 workers has cost the undertaking more than it thought it would.

If there wasn’t any strike, BEST would have earned an approximate of Rs 4 crore on Monday but instead it ended up earning less than Rs 1 crore, said officials.

The strike had led to more than 60 per cent of the undertakings services to be off the road. In fact, despite the strike being called off at around 4.30 pm, many of the workers did not come back to work causing a loss of over Rs 3 crores.

An official said, “If the buses are at a standstill buses we are literally bleeding money as the idle machine will still require the maintenance but we will not be able to recover the cost as they did no ply.”

This was also the reason why, BEST had communicated that if the loss continues for another day or two it would mean almost 10 per cent of the money required to pay the salaries of the workers, said an offical.  Another official added, “Had the stalemate continued and the amount in losses would have come up to say Rs 10 crores, it would have been equal to 10 per cent of the salaries we require to pay the workers in a month.”

The BEST had seen a loss of Rs 12 crore during a two-day strike that was held in April of 2014, over revised working hours.

The conductors and drivers at the time had felt that they are overworked due to the new schedule designed by a Canadian company, in order to streamline man-hours.