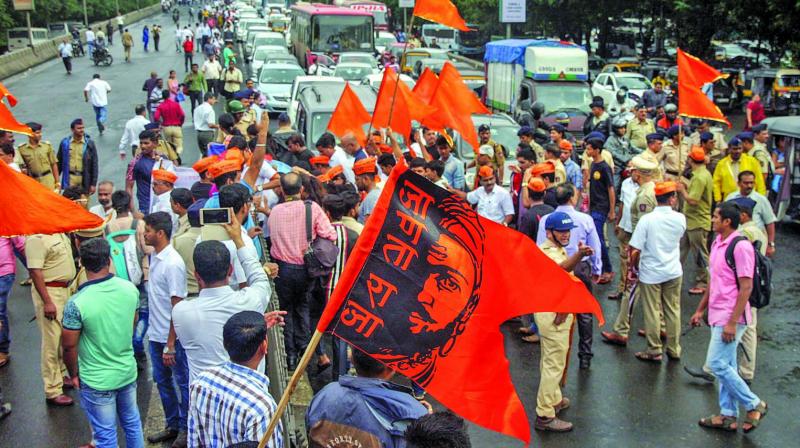 Sizeable police presence was thrown across all the three cities.

Mumbai: Mumbai, Navi Mumbai and Thane cities were unaffected by Maratha Kranti Morcha protests with no incidents of violence reported there. The areas like Kalamboli and Koparkhairane, which were most hit during last protest, were untouched on Thursday. Protesters assembled at tehsildar’s office in Panvel and Uran and submitted an application seeking reservation and left after mild protests.

In Dadar, Mahim and Bandra shops stayed open despite calls for bandh. In western suburbs as well, the bandh did not have much visible impact. An outstation train was stopped at Lonavala while a few BEST buses had to be diverted in Mumbai.

Sizeable police presence was thrown across all the three cities. The critical Sion-Panvel highway that was jammed on July 25 by the protestors, remained empty with minimal vehicular presence.

“The situation was completely normal throughout the day. The protesting groups turned up at the Tehsil offices in Panvel and Uran at around 11 am. After two hours of peaceful protests, they submitted the application and left,” said Ashok Dudhe, deputy commissioner of police, zone II, Navi Mumbai police.

Mumbai police were deployed at several spots in the city. “Bandh was peaceful with no reports of violence anywhere,” said Manjunath Singe, Mumbai police spokesperson.

The shops and markets in Goregaon and Andheri areas although did not see much crowd, but were kept open. However, in Lower Parel, few shops had shut down in the areas closer to the station. Cab drivers too refused to offer rides fearing attack on main roads.

In central Mumbai’s Dadar, an area known to be Maharashtrian dominated was calm and busy with its daily routine. The shops at Bhavani Shankar Road situated did normal business.

The trains and bus service also functioned normally. The local services on Harbour line were less crowded in morning whereas services the Central Railway (CR) and western Railway (WR) were normal. A CR official said, “The Coimbatore Express was detained by the protestors at Lonavala from 12.32 pm to 12.45 pm.”

Scores of passengers were at the receiving end of Maratha agitation as auto-rickshaws and public transport buses remained off the roads in Mira Road and Bhayander.

While educational institutions  had announced a holiday, most of the shops and other commercial establishment in the twin-city remained closed. The streets also wore a deserted look.