Raj Thackeray led MNS has also supported the bandh, due to which Sena has decided not to participate in the bandh. 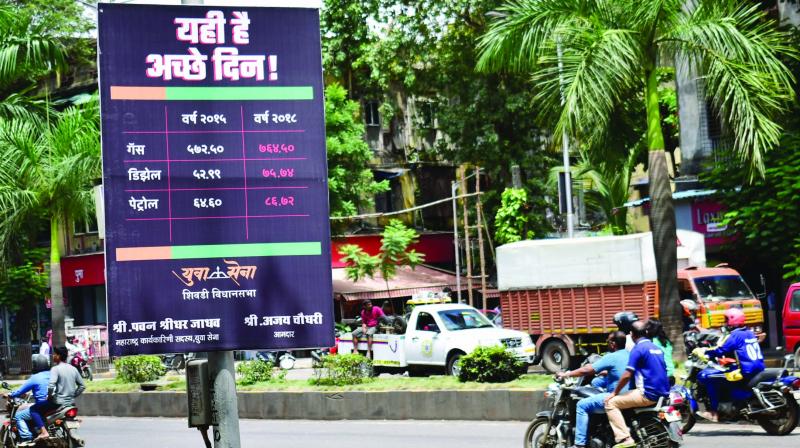 Mumbai: Slamming the Prime Minister Narendra Modi and chief minister Devendra Fadnavis led Bharatiya Janata Party governments on the increasing fuel prices, Shiv Sena has displayed banners in Mumbai and asked whether these are ‘Acche Din?’ However, the Sena will not participate in bandh on Monday, cleared party spokesperson MP Sanjay Raut.

The Sena has installed banners slamming both Central and state governments over the fuel price issue in which the party has compared the prices of petrol and diesel in 2015 and today in Mumbai. Petrol price was Rs 64.60 in 2015 which has escalated to Rs 86.72 per litre today. Diesel costed Rs 52.99 in 2015 and now it has reached Rs 70 mark per litre. The Sena asked Mr Modi and Mr Fadnavis governments that, whether these are ‘Acche Din’ which were promised to the common people before the elections of 2014?

However, the Sena will not participate in the Congress-led bandh on Monday said Mr Raut. Opposition are agitating now, they have awaken late. Let them fight and when they would fail, Shiv Sena would come on streets, Mr Raut cleared.

Though Shiv Sena has slammed the Union and state governments regularly, it is the partner in these governments and NDA (National Democratic Alliance) ally. Raj Thackeray led MNS has also supported the bandh, due to which Sena has decided not to participate in the bandh.