A group of Muslims on Monday were seen attending the speech delivered by the priest on the incidents that happened 1,400 years ago during Muharram. 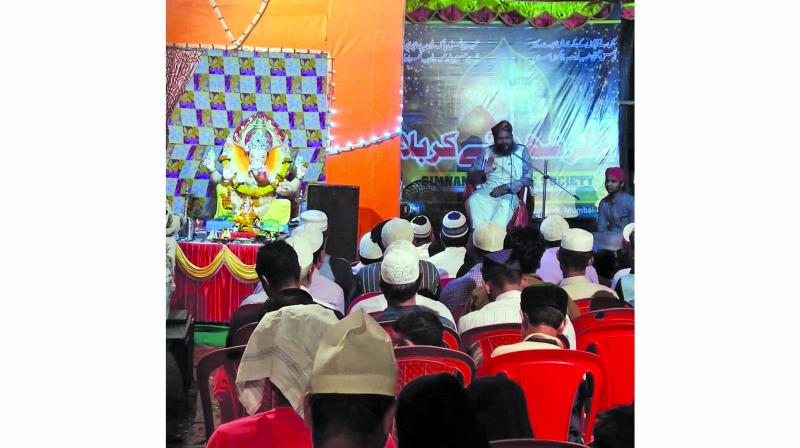 The sense of harmony between the Hindu and Muslim communities is palpable at Baiganwadi’s plot number 24.

Mumbai: At a time when communal hatred dominates headlines, a Hindu and Muslim group in Govandi have been teaching the meaning of peaceful coexistence by observing Ganeshotsav and Muharram in one pandal.

This is the fifth year that both communities are sharing the pandal as Muharram and Navratri had been celebrated simultaneously for three years and Ganeshotsav and Muharram was observed at the same time last year as well. However, since the dates of Muslim holy days keep rotating as per the Islamic calendar, from next year onwards the festivals may not clash for the next couple of decades.

The sense of harmony between two communities is palpable at Baiganw-adi’s plot number 24, wh-ere a pandal has installed a Ganesh idol as well as made arrangements for Muharram. A group of Muslims on Monday were seen attending the speech delivered by the priest on the incidents that happened 1,400 years ago during Muharram.

“Interestingly, the same lights illuminate the pandal for visitors coming for Ganesh darshan and for those attending the Muharram discourse. The same microphone and loudspeakers are used by both communities,” said Kalam Khan alias Babu, the president of Simnani Welfare Society, which organises the Muharram discourse every year at Baiganwadi.

Stating that the locals of the area were all childhood friends, the president of the Hindu group, Shri Samarth Seva Sangh, Rahul Gupta, said, “We all believe in sharing a common celebratory space and accommodating each other during festivals.”

He added, “Five years ago when we noticed that Navratri and Muharram would be celebrated together, we held a meeting and discussed the arrangements. The timings of the programmes, which were to be held, were planned in such a way that both communities could enjoy themselves at one place without creating any problem for the other. With prior communication, everything was sorted out.”