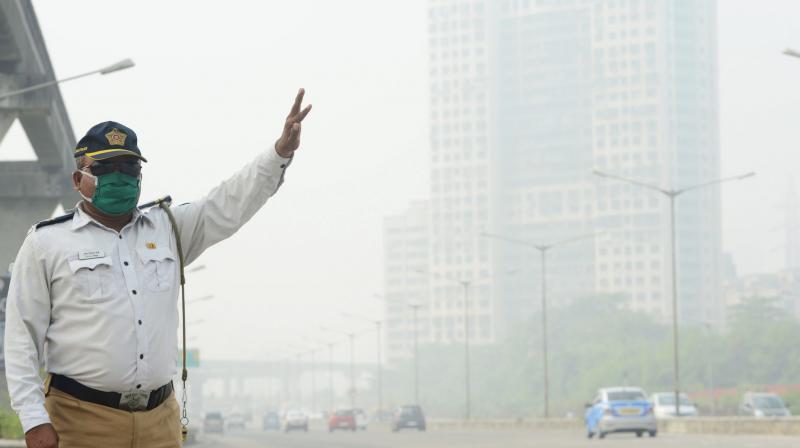 Visibility on the streets was low on Saturday.

Mumbai: Experts have contended that even with normal temperature of 29-28 degrees Celsius, the city is enveloped with a thick layer of haze, attributing it to conditions that reflect smog. Indian Institute of Tropical Meteorology (IITM) that looks into the air quality of the country stated that smog is an indicator of increasing air pollution in the city.

Gufran Beig, deputy director, IITM stated that after the strong winds of Cyclone Ockhi, Mumbai is now experiencing relatively lower wind speeds, due to which the pollutants are left suspended in the air.

“The hazy conditions can be attributed partly to the air pollution as the air quality of the city has been recorded as poor. The calmer winds and increased moisture in the air is holding in the city’s pollutants, resulting in smog,” said Gufran Beig.

Officials at Skymet Weather have maintained that with the decreasing air quality the thick haze is a smog situation and will exist for a shorter duration, given the weather conditions. “Since the temperature is moderate along with poor air quality index and there are reports of visibility being reduced to 50 metres, the haze condition is the smog surfacing in the city’s air,” said Mahesh Palawat, chief meteorologist, Skymet Weather.