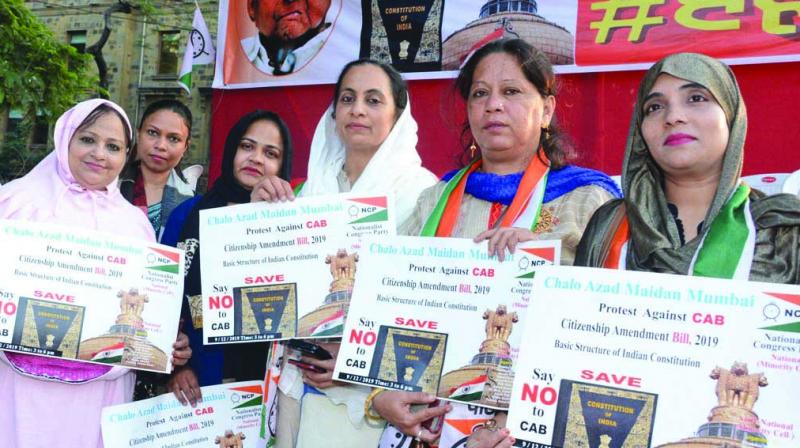 Mumbai: The ideological differences between the state’s new allies, the Shiv Sena and Congress, came to the fore when the Citizenship (Amendment) Bill was tabled in the Lok Sabha on Monday.

While the Shiv Sena supported citizenship for immigrant Hindus, it opposed the granting of voting rights to illegal 'intruders'. The Uddhav Thackeray-led party’s ‘middle line’ stand is in stark contrast to the Congress, which has categorically opposed the bill.

The Sena said that people who get Indian citizenship under the proposed Citizenship (Amendment) Bill should not be granted voting rights for 25 years.

Leading the Sena charge in the Lok Sabha, Sena MP from Ratnagiri-Sind-hudurg Lok Sabha constituency, Vinayak Raut remarked “Ghuspa-ithiyon ko bahar nikalna humari zimmedaari hai (it is our responsibility to evict infiltrators). We  want to know how many have come from these countries and have sought refuge. The nation is already short of reso-urces. If these people are being given citizenship, that is fine, but don’t give them voting rights for 25 years.”

Questioning the inclusion of Afghanistan in the bill, the Sena MP added that although Northea-stern states have been excluded from the purv-iew of the bill, people there were still afraid that their land would be taken away. Vinayak Raut further said that “since refugees cannot be resettled in the Northeast, where will you resettle them? What is the policy for that?”

Another Sena MP, Sanjay Raut, was of the view that besides Paki-stan, Bangladesh and Afg-hanistan, refugees from Sri Lanka should also be allowed to get Indian
citizenship.

Earlier Sanjay Raut had tweeted, “Illegal Intruders should be thrown out. Immigrant Hindus must be given citizenship, but let’s give rest to allegations of creating vote and not give them voting rights, what say? And yes what about pandits, have they gone back to Kashmir after article 370 was removed? (sic)”

The bill seeks to grant Indian citizenship to non-Muslim refugees from Pakistan, Bangladesh and Afghanistan escaping religious persecution there.

Sena has 18 MPs in Lok Sabha and its stand on the bill is being closely watc-hed as the saffron party heads a coalition government in Maharashtra with the NCP and Congress.