The state also decided to donate its Dauphin helicopter to an educational institute as its condition is beyond repair. 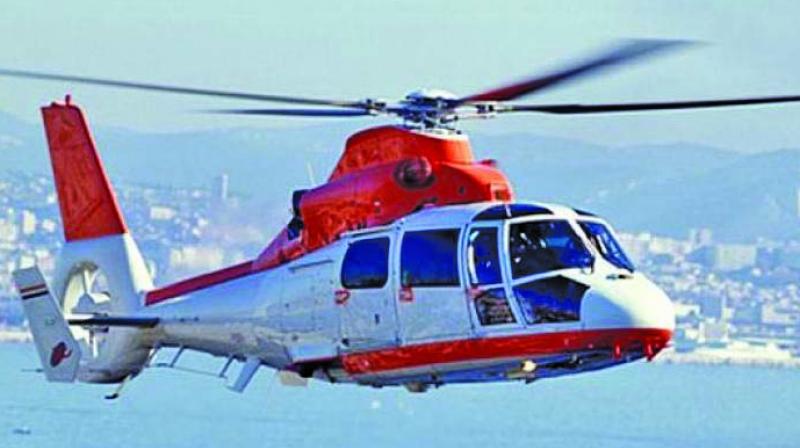 The Bombay Flying club has also reduced to take Dauphin

MUMBAI: The state-owned Dauphin helicopter, which was supposed to be scrapped, has found no takers since September 2017. The state cabinet had decided that the helicopter should be donated to an education institute like the IIT, but the latter refused the offer, saying it already has a copter.

The Bombay Flying club too has refused to take the Dauphin. Two schools, one from Aurangabad and one from Vikhroli, did show interest initially but the handover did not happen. Now the government does not know now what to do with the aircraft, which has been grounded for the 10 years.

After chief minister Devendra Fadnavis escaped three helicopter accidents, the state government decided to buy two new helicopters. One is for the use of the chief minister and the other for traveling to the naxal-infested Gadchiroli.

The state also decided to donate its Dauphin helicopter to an educational institute as its condition is beyond repair.

“We wanted some big education institute like the IIT to come forward and take the copter, but they have refused. The Bombay Flying club is also not interested. Two schools, one from Vikroli and one from Aurangabad showed interest initially but nothing happened after that.

The helicopter needs at least 100 sq ft space to keep it for exhibition, which city schools might not have, but schools or education institutes could keep it. However, we haven’t got the desired response,” an official from the Aviation department told The Asian Age.

As per industry experts, the average maintenance cost of a helicopter that is grounded is Rs 3 crore per year.

The state government is in the process of buying two new copters and would need to dispose off the older ones, the official said.

At present, the CM is using private helicopters to travel to rural areas. In May 2017, the state government empaneled two private aviation firms, Adonis and Aloft, from which it hires helicopters and planes.