Sources said that a senior north Indian city-based Congress leader had made the arrangements for the visit to the temple. 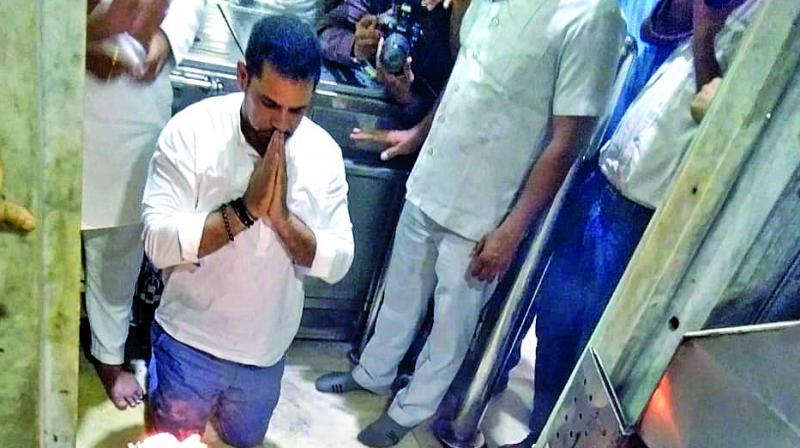 Mumbai: Robert Vadra, the husband of Congress general secretary Priyanka Gandhi, paid a visit to Mumbai’s famous Mumbadevi temple. However, it turned out to be an unpleasant experience for him as locals began chanting ‘Modi, Modi” after he entered the shrine. As the situation got tense, the police arrived at the spot to clear the way for Mr Vadra to be brought out.

Sources said that a senior north Indian city-based Congress leader had made the arrangements for the visit to the temple. A few years ago, the businessman had visited Siddhivinayak and Haji Ali Dargah.

As soon as he had reached the temple a group of Bharatiya Janata Party (BJP) workers started shouting, “Modi, Modi, Modi”, “Modi Zindabad”, “Bharat Mata Ki Jai.” Some even tried to heckle him, but the police prevented any untoward incident.

Mr Vadra, who is the brother-in-law of Congress president Rahul Gandhi, was accorded tight police security and was escorted both inside and outside the temple during his short visit. He was in the temple for ten minutes.

“The local police station had deployed adequate security around the temple. After the chants by a group of persons, the police intervened to prevent a law-and-order situation. The said persons who shouted slogans, attempted to reach out and heckle Mr Vadra however they were held back,” said an officer of LT Marg police station.

Speaking with The Asian Age, the manager of Mumbadevi temple, Hemant Jadhav, said, “I have accompanied him and he performed Aarti. He told me that he was in the city on official work. He loves to visit religious places wherever he goes. Therefore, he came to seek the blessings of the first deity of Mumbai city.”

Speaking with the reporters, who were waiting outside the temple, Mr Vadra said, “I have come here only to seek the blessings of the Goddess. I don’t want any politics in the temple.”

Interestingly, Mr Vadra had lamented in a Facebook post earlier on Friday that “politics was at an all-time low.”