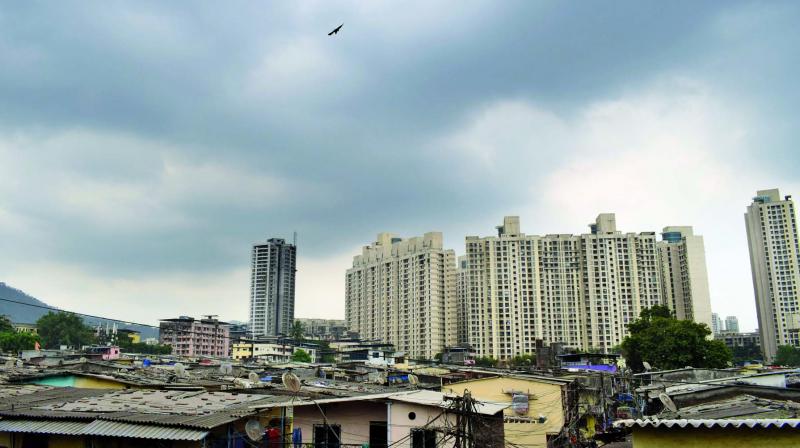 Mumbai: In good news for Mumbai, the city is likely to witness heavy rainfall in the next two days, according to weathermen. While the Indian Meteorological Department (IMD) had issued a warning of a cyclone moving towards the south coast, officials at Skymet Weather, a private weather forecast agency stated that the cyclonic storm would result in moderate rainfall on June 11. The city witnessed heavy spell of pre-monsoon shower on Monday also.

While the city has been reeling with hot and humid weather, light rains occurred on June 9, further increasing the humidity levels.

“The depression in the Arabian Sea is likely to turn into a severe cyclonic storm,” said an IMD official. The IMD report stated that depression over east central and adjoining Southeast Arabian Sea and Lakshadweep area, advancing north-northwestwards with a speed of about 15 kmph in last six hours has intensified into a deep depression, which will lead to cyclonic storm.

“As such, heavy rains along with thunderstorms are expected in Mumbai on June 11 and June 12. From then onwards, the rainfall’s intensity will be lighter on June 13 and June 14,” said the official. Skymet Weather too stated that the rains will bring pleasant weather in Mumbai as the city’s temperature is likely to be decreased by two-three degrees Celsius.

The IMD has advised  fishermen not to venture into the sea in the next few days and ports have been asked to flag the danger signal.

Weathermen have clarified that it is pre-monsoon spells in Mumbai and the Southwest Monsoon in the city will make a landfall on June 17.

“Now also, on and off pre Monsoon rain in Mumbai and its suburbs will continue for the next few days. Due to these rains, maximum temperatures will subside by 2 to 3 degrees and settle somewhere around 33 degrees,” read the Skymet Weather report.

The humidity levels were also recorded at 74 per cent, lower than the last three days.

Pre-monsoon rainfall in parts of Maharashtra has been deficient by more than half in the first nine days of June, raising concern about water stock.

Vidarbha has recorded the highest deficiency of rainfall at around 70 per cent as compared to the average before the official arrival of monsoon in the state, according to Indian Meteorological Departm-ent (IMD) officials. The pre-monsoon rainfall has been grim in Mahara-shtra, especially in the capital city Mumbai.

The delay in the arrival of the monsoon has led to an overall rainfall deficiency of 45 per cent in the country in the first nine days of June.

Of the four meteorological divisions of the country, the deficiency has been the highest i.e. 66 per cent, in central India which covers the states of Maharashtra, Madhya Pradesh, Gujarat, Goa, Odisha and Chattisgarh.

“In Vidarbha, the rainfall deficiency rose to 70 per cent, while Marathwada has recorded 50 per cent deficiency. Already, these districts have been reeling under low water stock in the reservoirs,” said an IMD official. The country received only 17.7 millimetres of rainfall as against the normal precipitation of 32.4 millimetres, which indicates a deficiency of around 45 per cent.

The rainfall deficiency in June could be higher due to the sluggish pace of the monsoon and a weak El Nino, a phenomenon associated with the heating of the waters of the Pacific Ocean.

According to Skymet Weather, Satara has recorded 46.4 mm of rainfall, Mahabaleshwar 10.6 mm, Pune 6.3 mm and Solapur 5.9 mm of rainfall on June 10. Mumbai too witnessed light rain in a few parts on June 10 and June 11.