A 25-year-old pregnant woman was stranded at Mithaghar. 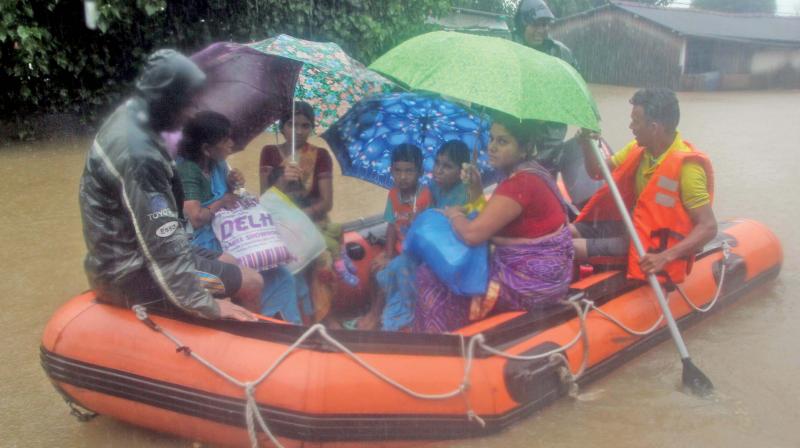 Mumbai: In one of the major rescue operations conducted on Vasai-Virar stretch that has been submerged under water amid ceaseless downpour since Saturday, the police and National Disaster Response Force (NDRF) teams along with Fire Brigade and others reached out to at least 120 stranded persons on Tuesday. Among those also included a 25-year-old pregnant woman, Asha D’Souza, a homemaker, who was stranded in Mithaghar area, and was rushed to a hospital in a boat by the Palghar police.

The NDRF-led rescue operation continued till late in the night while the Navy was kept on standby. The Palghar police had already issued advisory on Tuesday asking people not to use cars owing to heavy water-logging in the region. The Mumbai-Ahmedabad highway was also waterlogged at the Kinara Dhaba junction affecting the traffic movement. As the situation worsened, with information on the plight of the stranded persons, various governmental agencies swung into action.

“While NDRF was called in, teams of police, revenue department, Fire Brigade, local municipal corporation were formed and their officers were also deployed there. As many as 70 people were rescued from Vasai's Mithaghar area that included women, children, senior citizen. All those were provided with food packets by us,” said Hemant Katkar, Palghar police spokesperson.

The police added that those who could not return to their homes, were put up at the Hanuman Mandir Hall near Vasai station.

Palghar SP Manjunath Singe said the police, along with the civic body, evacuated the residents and provided them medical care. Talking to The Asian Age, SP Shinge said, “Asha D'Souza who was pregnant was on her way to hospital, we rescued her and shifted to Palghar Civil Hospital, along with her there were several of people who were rescued.”

Alice Fernandez, who was with D'souza, said, “Police and other agencies rescued us, we were shocked to see such rains.” She added, “It was a medical emergency and we had to leave even though it was raining heavily.”

Police officials stated, “NDRF team has reached Manikpur village, district Palghar, where Water level has risen and many villagers are reported to be stranded. Around 300 people were stuck in their homes in Vasai town since Monday due to water logging.”