Over 4 lakh rescued in Kolhapur, Sangli

The government has set up 187 camps in Kolhapur and 117 camps in Sangli, where people are being provided food and medical help. 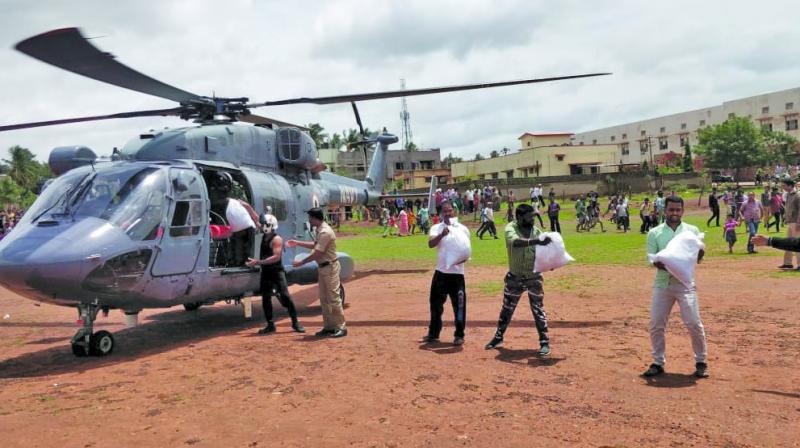 Rescuers from the Indian Navy join the relief efforts in Kolhapur on Saturday. (Photo: ASIAN AGE)

Mumbai: Rescue efforts continued in full swing in the flood-affected districts of Maharashtra on Saturday, even as water levels continued to recede.

Over four lakh people have been moved to safer locations from the flood-hit parts of Maharashtra in the last five days, including 3.78 lakh from the worst-hit Kolhapur and Sangli districts, government officials said.

In a breather to the rescue and relief efforts, the situation showed signs of improvement on Saturday after water levels started receding, albeit slowly.

Chief minister Devendra Fadnavis reviewed the rescue and relief operations in Sangli and interacted with the people. Addressing a press conference later, Mr Fadnavis attributed the flooding to “unprecedented” rainfall during this monsoon. He also requested people to not panic, while assuring everyone that the situation has been under control. “I appeal to all political parties to not politicise the situation. We are ready to hear and act on your suggestions. It is time to stand united and help flood-affected people,” Mr Fadnavis said.

Fourteen teams of Indian Army, 12 teams of Indian Navy, six teams of Indian Coast Guard and two teams of SDRF have been deployed in Sangli, the worst affected district. Mr Fadnavis told media persons that over seven tons of food, food grains and water were distributed to people until Friday.

The government has set up 187 camps in Kolhapur and 117 camps in Sangli, where people are being provided food and medical help. Meanwhile, three more bodies were recovered in the boat capsize incident that took place on Thursday in Palus Taluka of Sangli district. The death toll in the incident has gone up to 12.

Help has started pouring in for flood-affected people in western Maharashtra, with the Shri Saibaba Sansthan Trust (SST) of Shirdi announcing financial assistance of Rs 10 crore.

“The floods in western Maharashtra have left thousands of people homeless. To tide over this natural calamity, the Shri Saibaba Sansthan Trust has decided to provide financial assistance of Rs 10 crore to the chief minister’s relief fund for flood-affected people,” SST chairperson Suresh Haware said Saturday.

The Shirdi-based trust has also decided to send medical teams and medicines to the flood-hit areas, he said.

Apart from the SST, other organisations, too, have stepped in to raise relief funds. Muslim activists of the Rashtra Seva Dal have decided to donate ‘some part of the Bakri Eid Qurbani amount’ to flood-affected people.

The RSS Jankalyan Samiti has started providing medicines, food, water and healthcare at several places in Kolhapur. “The financial aid can be deposited to the organisation’s Bank of Maharashtra branch in Kolhapur (account number 60025310280, IFSC code MAHB0000326),” said Vinayak Kulkarni from the Jankalyan Samiti.

Meanwhile, chief minister Devendra Fadnavis tweeted, “We are facing a flood situation in some districts. The state government is giving its best and coordinating rescue and relief efforts. Many social organisations are also actively engaged with the government. I appeal to everyone to contribute offline/online via the #CMReliefFund. (sic)”

The Navy Saturday rushed an additional 15 teams for rescue and relief operations from Vishakhapatnam to Kolhapur. The Navy also distributed food and drinking water bottles to rescued people in Sangli.

“The additional 15 rescue teams of the Indian Navy with boats and rescue equipment were airlifted from Visakhapatnam to Kolhapur. This is one of the biggest rescue operations involving the Navy in recent times,” said Mehul Karnik, Indian Navy spokesperson.

Meanwhile, the existing 14 Navy teams in Kolhapur had proceeded to Shiroli village (Shirol block) near Kolhapur for rescue operations. The teams were moved there at around 6 am Saturday.

Meanwhile, the teams from Goa, too, continued with their rescue mission in Kolhapur. Till late Friday, four rescue teams deployed at Chikhali village had evacuated people stranded in areas inundated by water. They continued the rescue effort from Shivaji bridge even as heavy rains lashed the area.

“Additional divers to augment the teams were provided through air sorties from Goa to Kolhapur. A total of 980 people, including 597 women, 190 children and around 193 patients-elderly people were rescued to safety throughout Friday,” Mr Karnik said. The Navy has reportedly kept two teams on standby in North Goa.