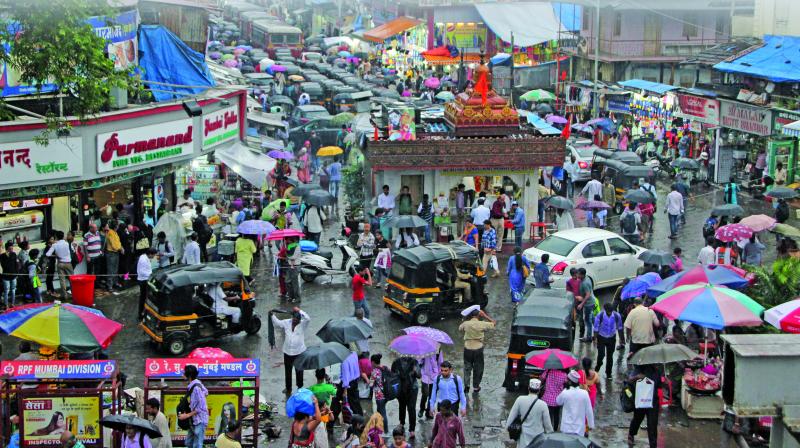 The bustling market around a shrine situated in the middle of the road at Malad. (Photo: Mrugesh Bandiwadekar)

Mumbai: The Brihanmumbai Municipal Corporation (BMC) faces a race against time if it is to comply with the high court deadline of removing all illegal religious structures across the city by November 17. With little over a month in hand, civic chief Ajoy Mehta has directed civic officials to expedite and complete action against the remaining 169 such shrines within a month.

Out of a total of 495 unauthorised shrines in the city, the civic body has so far taken action against 326 structures, whereas 169 are still remaining. Among them, L ward (Kurla) tops the list with 31 illegal shrines, followed by H-West (Bandra, Santacruz west) and H-East (Bandra, Santacruz east) with 20 and 15 structures respectively. Ward C (Bhuleshwar, Crawford Market) and S (Bhandup) also have 14 illegal shrines each.

“While illegal religious structures in majority of wards have been removed, there are still some areas that are having such shrines. We have asked ward officers of these areas to undertake a planned drive to take action against them. We have also asked them to take sufficient police protection,” said Ranjit Dhakne, deputy municipal commissioner, encroachment removal deparrment.

Initially, the municipal corporation had identified 739 illegal religious structures in the city after the cut-off date of September 29, 2009. Of them, 207 belong to A category, whereas 532 are from B category. Category A was for those religious structures, which did not interfere with city’s Development Plan (DP) and can be
regularised, while category B are the ones which interfere with the DP and need to be demolished. The municipal corporation had invited suggestions and objections to the 532 B category structures and held hearings on the public feedback and finalized the list of 495 illegal shrines in the city.

However, some citizens have voiced their opposition to BMC’s action. “Some of the crosses in Bandra, Marol, Gundavali and Andheri are more than 100 years old, but still the BMC terms them illegal.

If they are disturbing pedestrian movement, we are willing to relocate them. But the BMC officials are not interested in this,” said Godfrey Pimenta, from Watchdog Foundation.