The jeweller had approached the Thane crime branch on September 20 and lodged a complaint against the trio. 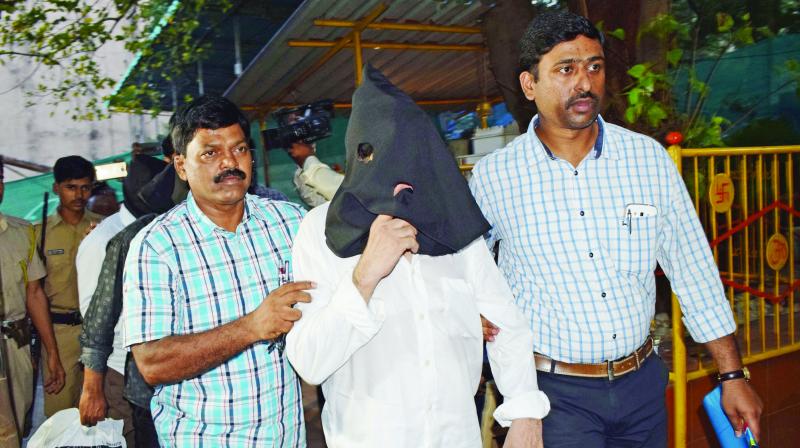 File picture of Iqbal Kaskar being brought to a police inquiry.

Mumbai: From the gold extorted from a Thane-based jeweller in 2015-16, one of the arrested aides of Iqbal Kaskar had allegedly gifted a gold necklace to a bar girl, revealed Thane police’s probe into an extortion case against the trio. The Thane crime branch’s anti-extortion cell (AEC) has tracked down the bar girl in Mira Road and is now in the process of recovering the necklace from her.

Investigators said that Asrarali Sayyad (58), who was given the ornaments for his daughter’s marriage had mortgaged them with two jewellers in Mahim and Thane’s Majiwada area.

A part of the money which he received was used by him for his daughter’s marriage, and some of it was used to buy a five tola gold necklace for a bar girl.

“The bar girl has also mortgaged the necklace with someone, and we are trying to locate it. We are questioning her to get more details about the gift and her acquaintance with Sayyad,” said a crime branch officer.

Kaskar, Sayyad and Mumtaz Shaikh had extorted 20 tola gold from a jeweller in 2015-2016, following which an extortion case was registered against them. The AEC officials recovered ten tola of the extorted gold last week. Sayyad splurged a part of the loan money at bars and on a bar girl.

The jeweller had approached the Thane crime branch on September 20 and lodged a complaint against the trio. He came under the radar of the gang after Shaikh learnt that the jeweller was trying to sell a land parcel in Thane. He then informed Sayyad and Kaskar about it, and they started threatening the jeweller in order to strike a deal for the land.

However, when the jeweller learnt that they were D-gang henchmen, he refused to go ahead with the potential deal. After that, Sayyad and Shaikh, along with Kaskar, went to his shop and allegedly extorted ornaments worth Rs 15 lakh from him.