Made taxi driver stop vehicle by saying he was diabetic and had to relieve himself. 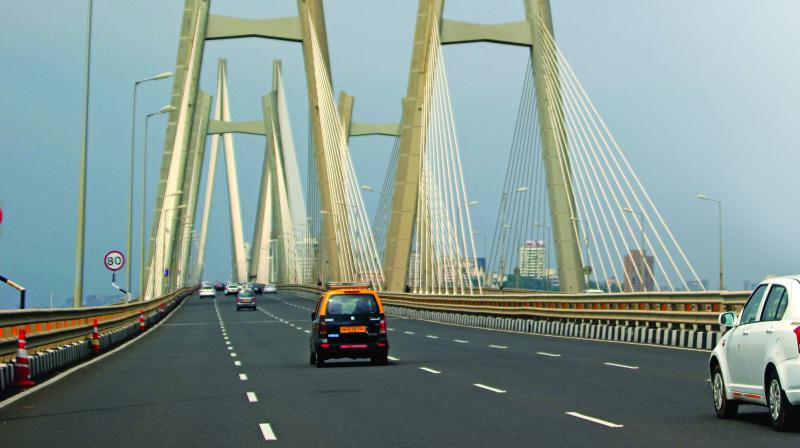 Falling prey to his story, the driver stopped the car, and the man jumped off the sealink.

Mumbai: A 40-year-old unidentified man jumped off the Bandra-Worli sealink on Monday night at 9.30 pm. The deceased, who hailed a taxi from Haji Ali to go to Bandra, asked the taxi driver to stop on the sealink. When the driver refused, he said he was diabetic and needed to relieve himself. Falling prey to his story, the driver stopped the car, and the man jumped off the sealink.

His body was recovered late on Monday, and is yet to be identified. The Worli police has registered an Accidental Death Report (ADR). According to police sources, the taxi driver Shamshuddin Shikalkar, is being questioned for stopping the car on the sealink.

Shikalkar picked up the man from Haji Ali at 9 pm on Monday and was taking him to Bandra’s Lilavati Hospital. When the taxi was halfway past the sealink, the deceased asked the driver to stop the car. During the trip, the man had also borrowed the taxi driver’s phone to make a call.

Ganesh Dusekar, senior police inspector of Worli police station, said, “Since the deceased jumped off in the waters, his pants were washed off by the tides, which could have held his wallet. Since we found no wallet, it is very difficult for us to identify the body.”

Reacting to rumours of his face being eaten by fish, Mr Dusekar rubbished them and said his face was “just fine”. He added, “We have found a wristwatch from the taxi.”

The rescue operations men recovered the body a few hours later as it was low tide. The body was rushed to the civic-run Nair Hospital, where the man was declared dead before arrival.

August 23, 2012
The first suicide on the Sea Link was committed on August 1, 2012, after Lalit Sheth, owner of Raj Travels, killed himself by jumping off the bridge, allegedly due to debt.

March 2, 2014
Ravi Pillai (32), a hotel employee, jumped off the sea link. He was allegedly drunk and had been fighting with his wife over the phone.

August 19, 2014
Parel businessman Lalchand Rathod (65), asked his driver to head towards the sealink. There, he stepped out of the vehicle and jumped into the sea.

July 3, 2017
Khar resident Pawanjeet Singh Kohli (24), took the extreme step. He was heartbroken after his former girlfriend got engaged.