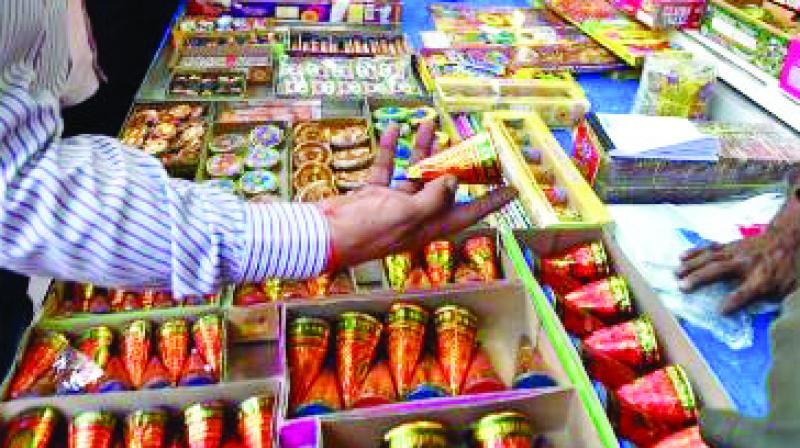 Mumbai: A day after the Supreme Court banned firecrackers in Delhi, Shiv Sena leaders were divided over the issue of banning the same in Maharashtra. Environment minister Ramdas Kadam said that he would speak to chief minister Devendra Fadnavis about banning the firecrackers in the state. However, Sena MP Sanjay Raut opposed it by saying that many depend on firecracker industry for employment.

While taking oath for an environment-friendly Diwali in Mantralaya on Monday, the environment minister expressed concern about use of plastic. Reacting to the firecracker ban in Delhi, Mr Kadam said “I will talk to the CM and request if we can also ban crackers in Maharashtra in line with the Supreme Court order for Delhi. The festivals in Maharashtra should be pollution-free. When we burn fire during Diwali, it causes pollution, affects human beings, shops get ablaze, and children also die. Pollution affects the atmosphere, the reason why sometimes there is less and high rains.” The comment from the minister came just a few days ahead of Diwali festival.

However, the objection came from within Shiv Sena, as Sanjay Raut opposed the proposal. “There are many people whose livelihood depends on the firecracker industry. The firecrackers are used in entire world and not in India alone,” Mr Raut said.

MNS chief Raj Thackeray asked why the ban on celebration of a Hindu festival. “Should we burst firecrackers on WhatsApp?” he asked sarcastically.