Tribals from 27 hamlets of Aarey claimed that metro car shed in Aarey is an infringement on tribal rights. 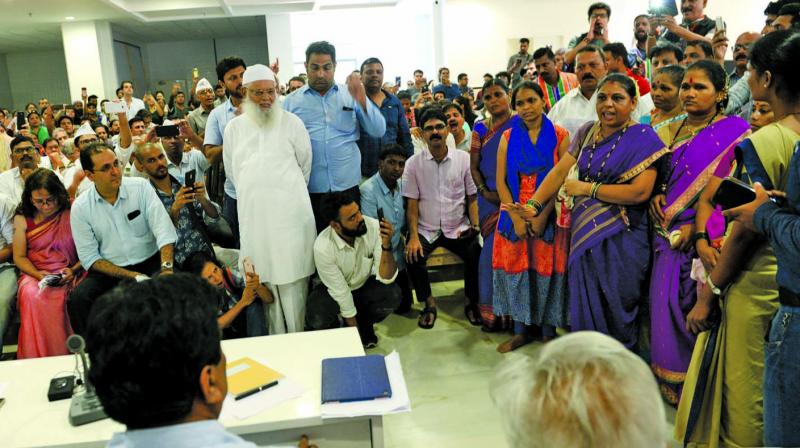 Mumbai: In a first of its kind demonstration to save the green lungs of the city — Aarey Milk Colony, thousands of citizens gathered for the public hearing against the car shed for Metro Line 3 at the site. People from all walks of life including tribals from Aarey raised their concerns over the removing of 2,702 trees claiming that it can turn out to be detrimental for Mumbai to lose its last remaining green space. More than 37,000 objections were submitted.

Citizens and activists also pleaded the Garden Department of BMC to cancel the public hearing stating that the department was not prepared to conduct hearing for a large number of people in an only one-day meeting. “There was no list of names, no copy of citizens’ letters with them. Only 10 people out of thousands could voice their objections in such a short time. This is happening first time in Mumbai, where so many citizens attended a public hearing against tree-cutting,” said Amrita Bhattacharya, member of Aarey Conservation Group.

Among the objections, the issue of the legality of the public hearing was raised. “Aarey is indeed a forest with more than 4 lakh trees. There are seven leopards documented in Aarey along with thriving biodiversity of birds and insects. Not only the forest department but also a no-objection certificate under Wildlife act is needed. The authority does not lie with BMC to sanction tree-cutting,” said Zoru Bhathena, an activist.

Tribals from 27 hamlets of Aarey claimed that metro car shed in Aarey is an infringement on tribal rights. “We will not go to SRA,” chanted the tribals together. “We can no more access our farmlands, our livelihood is destroyed. We are being forcefully evicted from our land. MMRC recently destroyed the house of Ashabai Bhoe at Prajapur along with fruit-bearing trees and now they say that there are no adivasis there,” said Ravindra Dodiye, a tribal from Aarey.

Citizens also pointed out the state government’s expert committee’s recommendation of alternative sites, including land at Kanjurmarg that was earlier rejected by the MMRC citing non-feasibility but later was decided for Metro Line 6. “There are several cases in court against metro car shed in Aarey, yet the tree-cutting permissions are being processed. At the adjacent site too, 160 trees were cut despite the permission for 137 trees. Why is their urgency? If the metro loses the case, the trees won’t grow back,” said Ms. Bhattacharya.

The BMC stated that they would seek a reply from the Mumbai Metro Rail Corporation on the objections of the citizens.