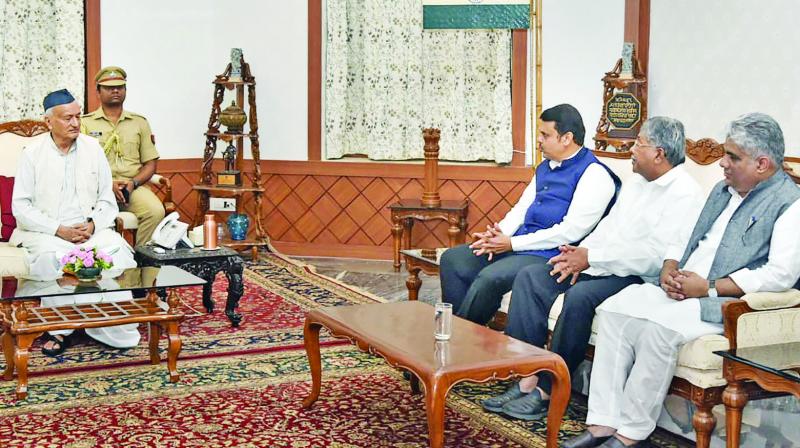 The governor office has sent a letter to Shiv Sena’s legislative party leader Eknath Shinde. “The Sena will have to inform the governor about its stand by Monday 7.30 pm,” a Raj Bhavan official said.

However, he refused to elaborate on which parties will support Sena-led government as it has only 56 MLAs in the 288-member House.

Sources said BJP chief Amit Shah had joined the second round of meeting from New Delhi via video conferencing.

Following the second round of meeting, a delegation led by Mr Fadnavis met governor Bhagat Singh Koshyari at Raj Bhavan. The governor on Saturday had invited the BJP, the single-largest party, to stake claim to form the new government. After meeting the governor, the state BJP president told the media outside Raj Bhavan, “The governor had invited the BJP yesterday (Saturday) to form the new government in Maharashtra. We have fought the election as a Mahayuti. The mandate was given to the Mahayuti. However, Shiv Sena is not interested to come with us. Therefore, we can’t form the government now. This has been conveyed to the governor.”

He also said, “If the Sena wants to form the government, with support from the Congress and NCP, by disrespecting the mandate, we extend well wishes to them.”

Mr Raut taunted the BJP over its inability to form the next government. “If they (BJP) did not form the government, how would it have its CM. They have repeatedly saying that CM will be from the BJP and they would form the government under the leadership of the BJP. Now, they have withdrawn their claim,” he said.