Around 400 people raised concerns over violations of animal rights. 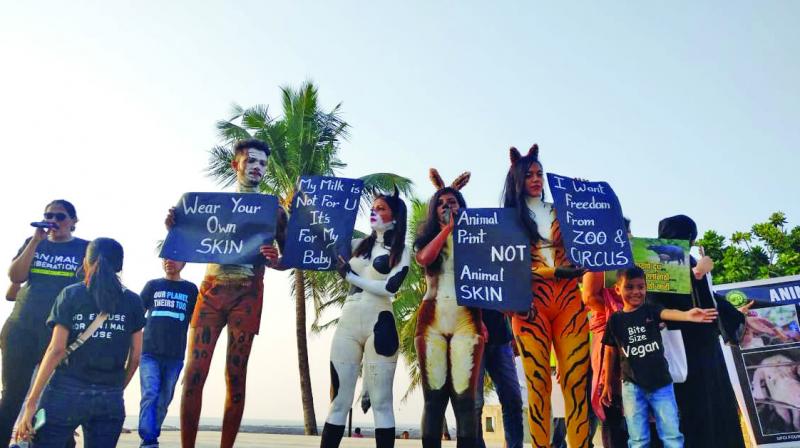 Mumbai: Students and activists held a protest on Sunday at Carter Road against the proposed zoo in Aarey Colony. Around 400 people gathered and raised concerns over alleged violations of animal rights and cruelty inflicted upon them for commercial purposes.

Citizens came dressed as various animals with banners and slogans on conserving the wildlife. They urged people to stop exploitation of animals for commercial needs. Among the various demands, one was regarding stopping the introduction of zoo in Aarey Colony proposed by the BMC.

“In the year 2019, zoos are not meant to be built as they are epitome of animal rights violation. We do not support zoos where animals are deprived of their natural habitats and forced into cages for the entertainment of humans. In case of Aarey, it does not even make any sense to cut down a forest, displace them and thrust them in an artificial zoo,” said Maheshwar Khetan, a Sustainable Architecture student.

Forest protection advocate associated with the Aarey Conservation Group Nayomie Prasad Kapur said, “We’re cutting forests and compensating with measly plantations outside forested areas. In the proposed zoo in Aarey, the government is going to house several large animals who don't usually exist in the same habitat there. What is the point of breeding wild animals in captivity in the name of conservation? Animals like lion, deer and tiger travel up to 10m through their territory, hunting and feeding. And we want to now cram these animals in an area that is less than one sq.km. depriving them of their natural life?”

The event organised by United for Compassion International (UFCI) and Vegan India Movement (VIM) also created awareness about ills of the animals agriculture Industry and demanded prohibition on animal testing for household products and medical products where unnecessary.