The rescue team later used tranquilisers to sedate the leopard and then took him to SGNP. 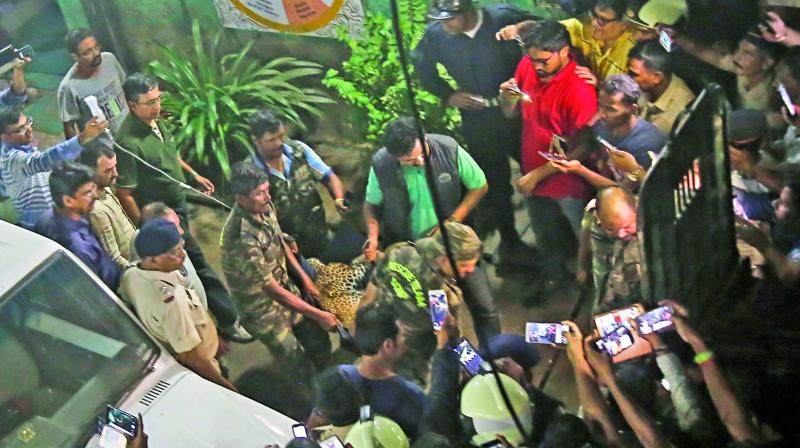 The leopard was caught by a team comprising of personnel from the SGNP and RAWW. (Photo: Shripad Naik)

Mumbai: An adult leopard strayed into Andheri east’s Sher-e-Punjab residential colony on Sunday morning and was spotted on the roof of building number six at 6.30 am. The leopard, which is suspected to have strayed from the forested tracts of the Aarey colony, later took shelter in a private-run nursery school, which was deserted on account of it being a holiday.

The leopard was eventually trapped 12 hours later by a team comprising of personnel from the Sanjay Gandhi National Park (SGNP) and wildlife NGO, Reqink Association for Wildlife Welfare (RAWW). The team used a net to trap the leopard, said sources.

The rescue team later used tranquilisers to sedate the leopard and then took him to SGNP. The school was shut as it was a holiday, but as its doors were open, the leopard managed to jump inside in the school premises.

Rescue operations were started in the morning and ended in the evening at 6.30 pm. The fire brigade sent an engine as a precautionary measure.

Talking to The Asian Age, wildlife activist Pawan Sharma of Reqink Association for Wildlife Welfare (RAWW) said, “The leopard was inside the nursery school since morning. It might have come here from the Aarey Colony, but no one knows how it went inside.”

“Several leopards have been seen in the past venturing in this areas. They usually attack and eat poultry birds, goats and also stray dogs,” he said.

He added, “It is an astonishing thing that this particular leopard walked a long way to reach so deep into the dense human habitation to search for food despite being a male adult cat.”

The leopard had taken refuge in the ground floor of the building, which has a nursery school called Rose Bird Playgroup.

The leopard has been taken to the Sanjay Gandhi National Park for medical examination after that he will be released in the jungle.