The DGCA too had ordered an investigation into the case. 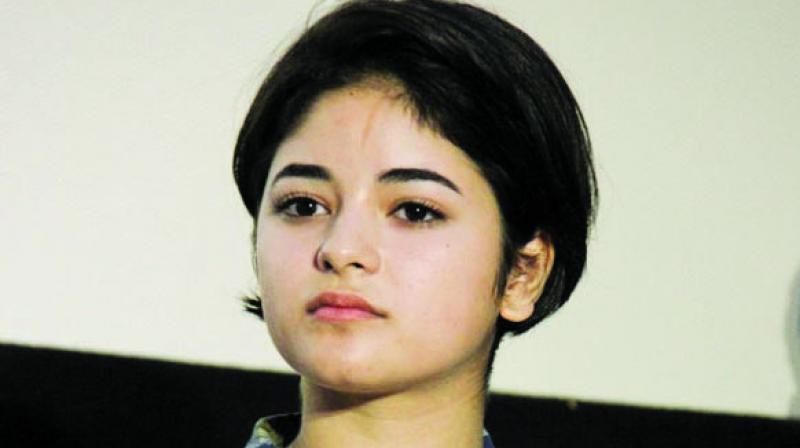 Mumbai: Dangal actress Zaira Wasim (17), was allegedly molested by a co-passenger while flying from Delhi to Mumbai on Saturday night. In an Instagram live video, the actress shared the details of her ordeal. The Sahar police arrested Vikas Sachdeva (39), on Sunday at 10.30 pm from the vicinity of the international airport. The police will now question him, said senior police inspector of Sahar police station Lata Shirsat.

Taking note of Zaira’s ordeal, minister of state for civil aviation Jayant Sinha said the offender would be put in the no-fly list if the allegation is proven.

Earlier, the Sahar police had registered an FIR against unknown persons under section 354 of the IPC, which pertains to molestation, and sections of the Protection of Children from Sexual Offences Act. The DGCA too had ordered an investigation into the case.

Zaira said the passenger sitting behind her had put up his feet on her armrest and tried to feel her up. The actress broke down while narrating the incident on Instagram.

According to the  police , the actress was sitting at her designated seat 1F, while Sachdeva was on seat number 2F, right behind her.

Narrating the incident, the actress said, “It was all chill till I felt somebody brushing against my back while I was half asleep. The person kept nudging my shoulder and continued to move his foot up and down my back and neck. The man made my two-hour journey miserable.”

The Maharashtra State Commission for Women (MSCW) as well as the National Women’s Rights Commission (NCW) said that they have taken suo motu cognisance of the case and sought a report from the police. NCW chairperson Rekha Sharma said, “If the report is sensed to be non-satisfactory, the Commission will be compelled to take action under powers in the NCW Act, 1990.”

MSCW chairperson Vijaya Rahatkar said, “We will inquire into the steps taken by Vistara to address the complaint. There should be inquiry into why the cabin crew did not help her. We have directed the Mumbai police to look into the matter immediately. It is sad that none of the co-passengers came ahead to help Zaira. We are with her, and will ensure she gets justice.”

In a statement released by the airline, Chief Strategy and Commercial Officer, Sanjiv Kapoor said, “We are deeply concerned and regret the unfortunate experience Ms. Zaira Wasim had onboard our flight last night. We continue to give this case our highest attention and are extending our full support to all relevant authorities for the investigations underway.” He further said, “In addition, we have submitted an initial incident report to the DGCA, and have also submitted all necessary details to the police.”

Sources said that after the whole incident was reported, the accused Sachdeva said that he was very tired and by mistake his foot touched Ms Wasim. Sachdeva also apologised for the mistake, said sources.