The petition had been filed before Shiv Sena chief Uddhav Thackeray took oath as the new CM of Maharashtra on November 28. 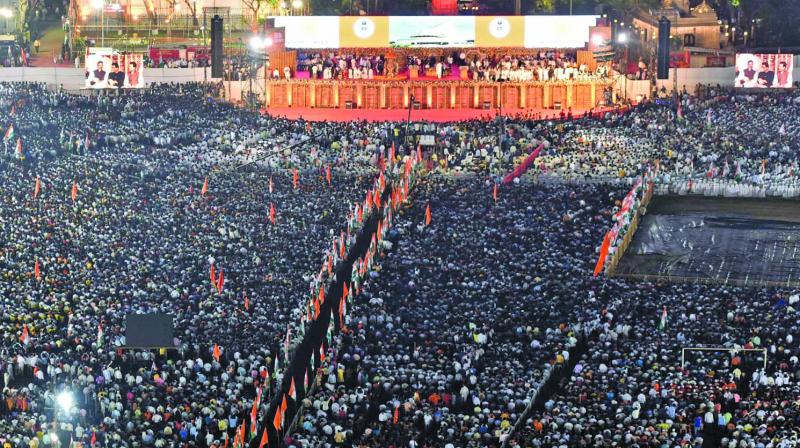 Swearing-in ceremony of the CM at Shivaji Park.

Mumbai: The Brihanmumbai Municipal Corporation (BMC) Tuesday filed an affidavit before the Bombay high court, justifying allowing the holding of chief minister Uddhav Thackeray’s swearing-in ceremony at Shivaji Park, Dadar. The BMC said that the ground was permitted to be used for the swearing-in ceremony as per Government Resolution (GR) 2016, which grants 45 days every year to hold ceremonies other than sports activities.

Kiran Dighavkar, assistant commissioner, G-north ward, filed the affidavit on behalf of the civic body in reply to a petition filed by NGO, Wecom Trust, raising objection to the holding of the chief minister’s swearing-in ceremony at Shivaji Park.

The petition had been filed before Shiv Sena chief Uddhav Thackeray took oath as the new CM of Maharashtra on November 28.

In the affidavit, filed before a division bench of Justice S.C. Dharmadhikari and Justice R.I. Chagla, the BMC stated that the urban development department (UDD) of the state, on January 20, 2016, had issued a Government Resolution (GR) specifying that in a year, Shivaji Park could be used for a maximum 45 days for events other than sporting and recreational activities.

The affidavit mentioned that the GR had provided a list of functions that could be held at the ground. As per the GR, six days were reserved for the use of Shivaji Park for holding functions approved by the state government.

The affidavit further stated that whenever the BMC received a request for grant of permission to use the said ground for holding functions specified in the said GR, permission was granted subject to terms and conditions.

The BMC claimed that on November 27, 2019, the Maharashtra chief secretary informed the civic authority about the proposed swearing-in ceremony of the chief minister at Shivaji Park on November 28.

Since such a ceremony had not been listed in the GR, the BMC forwarded the request to the state government, which granted permission for the ceremony as all 45 days had not been utilised. The court has now deferred hearing on the matter till January so that the petitioner can file a reply to the affidavit.