The Sena also blamed decisions like demonetisation and “unnecessary focus” on projects such as the bullet train for the current economic situation. 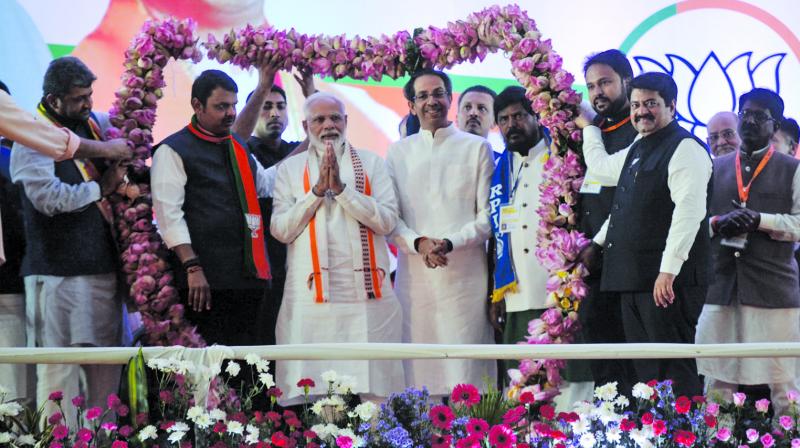 Mumbai: The Shiv Sena has slammed the NDA government for the country’s poor economic health. Quoting former RBI governor Raghuram Rajan in its mouthpiece Saamana, the Sena said, “It is apparent that the economy of the country has been paralysed.”

The party mirrored the concerns recently raised by Mr Rajan that India was in the midst of a “growth recession” with signs of a deep malaise in the economy that was being run through extreme centralisation of power in the PMO and powerless ministers.

The editorial stated that centralisation of power in the Prime Minister’s Office (PMO) was one of the reasons behind the poor economic health of the country.

The central government wanted the finance minister and the RBI governor under its control. Moreover, it was not ready to listen to economists as it considered the economy a share market gamble. Only a few people were taking decisions in the PMO and while their decisions were good for socio-political programmes, economic reforms had been sidelined.

The editorial further blamed demonetisation for the “shaking” economic condition of the country and claimed that during demonetisation, the then finance minister was kept in the dark and the then RBI governor was sacked for opposing the decision. The government was not ready to accept the current situation of the economy, it said.

The Sena also hit out at finance minister Nirmala Sitharaman for her remark on the rising onion prices that, “I don't eat onion and garlic, so don’t ask me about it.” The party termed her statement childish and claimed that even the Prime Minister was not willing to make any changes to it.

The editorial reminded Mr Modi that when he was the chief minister of Gujarat, he had said that onion was an essential commodity and had become so costly that it would have to be “kept in lockers”.

“The situation has changed and Modi is now the prime minister and the economy is in a ‘crisis’. An unconscious person is brought back to senses by being made to smell onion, but this is not possible now since onions have disappeared from markets,” it said in sarcastic comments.

The Sena also blamed decisions like demonetisation and “unnecessary focus” on projects such as the bullet train for the current economic situation.

“Whatever Pandit Nehru and his colleagues earned for the country, this government is selling it off,” it said, apparently referring to the proposed sale of public sector undertakings like the BPCL and Air India.