The ceremony took place in Mira Road on Thursday afternoon. 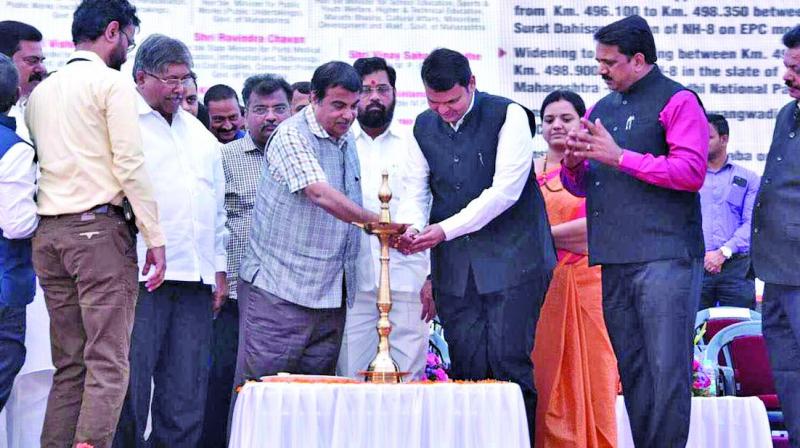 Mumbai: In a welcome move, the National Highway Authority of India (NHAI) will construct a new five-lane Versova creek bridge and make it operational within a time-frame of two years. CM Devendra Fadnavis and Union minister for road, transport, highways and shipping- Nitin Gadkari, performed a digitalized bhumi pujan (ground breaking ceremony) for NHAI projects  in Thane and Palghar districts worth Rs 3,000 crore including the 2.25 km long Versova creek bridge which carries a price tag of Rs 247 crore.

Batting for a London-style transport system to revamp public transport, Gadkari exhorted civic bodies to opt for greener, cost effective and ingenious buses run on ethanol and bio-CNG as fuel to combat pollution. While urging the state government to bank on waterways as an alternative mode of transport, Gadkari also spoke at length about various transportation projects mooted by his department which could be a game changer in transportation,environment and bring a detrimental transformation.

“While construction work of the 378 km long Mumbai-Vadodara Expressway will begin in another two months, after which one can cover the distance between the two cities in less than three hours, we are exploring a plan to introduce an Electric Corridor reserve one lane in each national highway for the exclusive use of electric trucks, powered by overhead cables on a dedicated lane. A pilot project for running electric trucks between Delhi and Mumbai, aimed at halving the cost of transportation between the nation’s capital and the business hub is on the offing.” said Gadkari, while offering his apologies for the unprecedented delay in starting the Versova creek bridge. “If we get full support and cooperation from the state government and the local civic body, we will try to throw open the bridge within 18 months.” he said.

Thanking Gadkari for his spot approval and swift clearances, CM showered a volley of praises on the union minister for his reputation of honouring his commitments. The ceremony took place in Mira Road on Thursday afternoon.