The People for the Ethical Treatment of Animals (PETA) has taken over the responsibility for these horses. 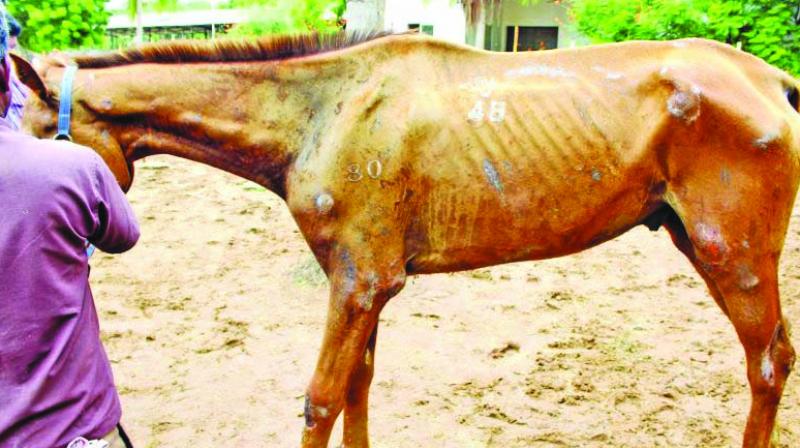 File image of an injured horse.

Mumbai : An Andheri metropolitan magistrate court has denied the interim custody of five horses that were rescued by police after being used in an illegal race to their owners. However, the owners were allowed to take the carts. The horses should be set free, said the court.

The health assessment reports presented in the court by two veterinarians from the state animal husbandry department, who had examined the horses, stated that they suffered from malnourishment, and had wounds all over their bodies. They said that if the horses were put back to work, their condition would worsen to the point of permanent disability.

The police took custody of horses on Tuesday after the police intercepted the horse-drawn carts, which were reportedly racing along the Western Express Highway at Vile Parle (east), booking their handlers for rash and negligent driving, treating animals cruelly and endangering the lives of motorists, animals and pedestrians.

The police took the horses to a cattle pound managed by the Brihanmumbai Munici-pal Corporation (BMC) in Malad, and the next day, one of the horses was found dead, and the post-mortem revealed that the animal had died of suffocation because the rope tied to its neck was too tight.

The People for the Ethical Treatment of Animals (PETA) has taken over the responsibility for these horses. It will secure shelter for them at a sanctuary in Sangli where they can receive veterinary care and live free and untied.

Talking to The Asian Age, PETA’s legal associate Bhumika Aggarwal said, “From protruding ribs from beatings, whippings, falls on hard pavement and more, these horses’ ravaged bodies reveal the extent of their mistreatment.”