Kejriwal also criticised the BJP-led Maharashtra govt for allowing private schools to flourish allegedly at the cost of government schools. 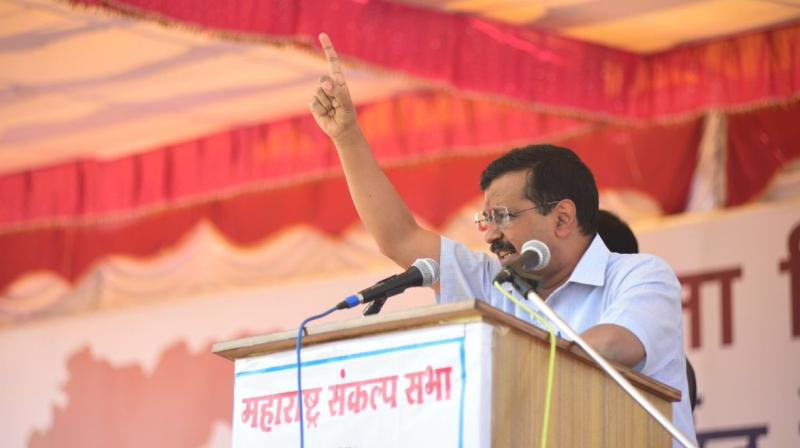 Mumbai: Delhi Chief Minister Arvind Kejriwal on Friday blamed the BJP and the RSS for the recent violence at Koregaon Bhima, which led to caste tension in Maharashtra.

Addressing a public meeting at Sindhkhedraja in Buldhana district of Maharashtra after paying homage to Jijabai, the mother of warrior king Shivaji, the Aam Aadmi Party (AAP) supremo said the Maratha king had worked to achieve an all-inclusive society.

The meeting was held on the occasion of Jijabai’s birth anniversary.

“The BJP-RSS (supporters) attacked Dalits at Koregaon Bhima, leading to caste tensions. We condemn this,” he said and alleged, “To instigate riots, on the basis of caste and religion, and rule is the BJP’s creed.”

Dalits visiting a war memorial at Koregaon Bhima in Pune district to commemorate an 1818 battle – in which the army of the East India Company, consisting of Dalit Mahar soldiers, had defeated the forces of the Brahmin Peshwa rulers – had come under attack on January 1. It had led to protests in various parts of Maharashtra.

Some pro-Hindutva leaders had opposed the 200th anniversary celebrations of the battle.

Kejriwal also criticised the BJP-led Maharashtra government for allowing private schools to flourish allegedly at the cost of government schools, saying that a government that could not run schools had no right to rule.

He also alleged that the BJP in Maharashtra had “crushed” the dreams of social reformer couple Mahatma Phule and Savitribai Phule, as well as that of Shivaji.

The AAP leader pointed out that when he became the chief minister of Delhi three years ago, the condition of the government schools was bad in the national capital.

Stating that his government had conducted an audit of the power companies in the national capital, Kejriwal said, “Today, Delhi has the cheapest power tariff.”

He said the farmers of the country needed to come together to launch an agitation, demanding the implementation of the Swaminathan Committee report on remunerative prices for their produce.

“We gave Rs 50,000 per hectare to the farmers in Delhi when they faced a crop loss due to unseasonal rains,” he said.