The Yellow Gate police bu-sted a racket of motorbike thieves and recovered 29 stolen two-wheelers worth Rs 7 lakh from them. 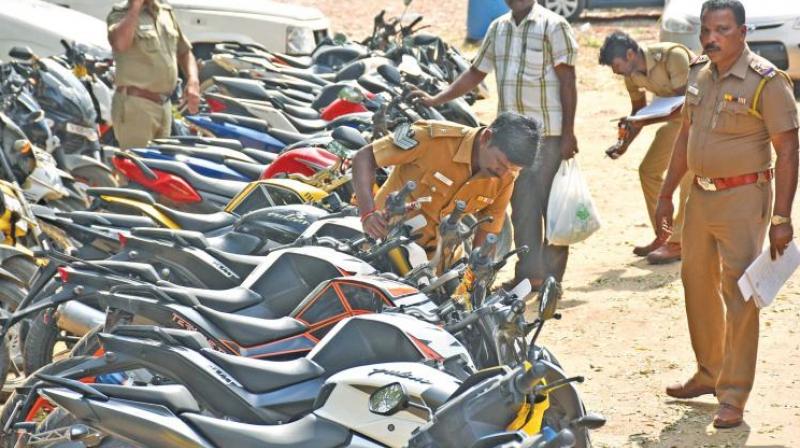 Mumbai: The Yellow Gate police bu-sted a racket of motorbike thieves and recovered 29 stolen two-wheelers worth Rs 7 lakh from them. The vehicles were kept at various locations in Navi Mumbai like Kharghar, Belapur from where the two-wheelers were recovered. One of the accused was apprehended after he turned up at the spot days after the incident.

“Footage at six different locations was checked, bu-t the face of the accused c-aptured in the CCTV camera was not very clear. Th-e lead was the black and yellow cap the accused w-as seen wearing,” said Su-rekha Kapile, senior ins-pector of Yellow Gate police station.

The police then laid a tr-ap at the spot where the accused, later identified as Mehraj Shaikh (19), tur-ned up wearing the same cap. The officials nabbed him and upon verification and questioning, he revea-led that the bike was sto-len with help of his acco-mplice. The other accused, Mushtaq Mansuri alias Salman (19), was apprehended from Belapur.

Their interrogation revealed that they had been committing two-wheeler thefts since 2016 in Mumbai and Navi Mumbai. They revealed of having stolen at least 29 two-wheelers and kept them at places in Vashi, Belapur and Kharghar, officials said. The police later found that Shaikh has other half a dozen cases registered against him.

The duo has been booked in a fresh case of theft as per the provisions of the Indian Penal Code and they have been remanded in police custody.