The PM10 was also recorded at poor levels in these areas along with Colaba and Bhandup. 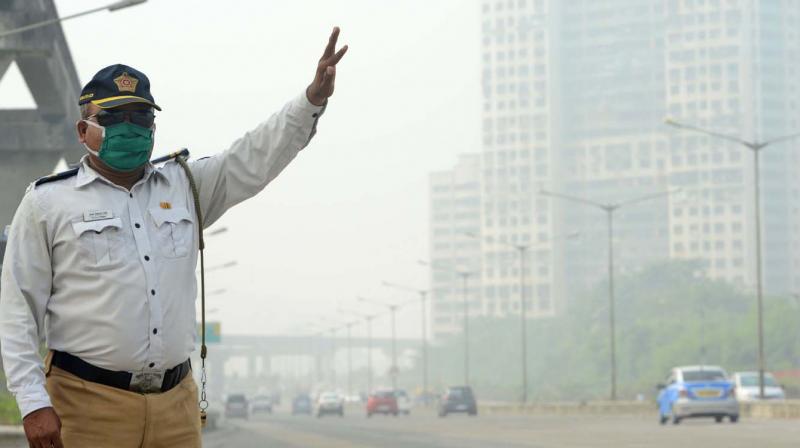 Weather experts have attributed the dip in air quality to cold weather of last few days.

Mumbai: Mumbai’s pollution woes have returned as the city saw very poor air quality in several areas. While the overall air quality index (AQI) registered 269 on Monday, according to System of Air Quality and Weather Forecasting And Research (SAFAR), areas such as Andheri, Borivali, Bandra Kurla Complex (BKC) recorded pollutants above 300, which come fall under the ‘very poor’ category.

Weather experts have attributed the dip in air quality to cold weather since the past few days, which has led to the suspension of pollutants on the surface for a long time.

Andheri recorded the poorest air on Monday with PM2.5 levels — particulate matter mostly arising from vehicular and industrial emissions — at 361; followed by BKC (350), Malad (322), Borivali (304) and Mazagaon (301), all falling under the ‘very poor’ category.

“The increase in AQI could be due to significant low temperature during last few days, due to which pollutants remain suspended in the air for a longer period of time,” said Dr Gufran Beig, project director of SAFAR. The city recorded overall PM2.5 at 120 (very poor), while overall PM10 — particulate matter arising from dust pollution — at 210 (moderate).

The PM10 was also recorded at poor levels in these areas along with Colaba and Bhandup. Meanwhile, Chembur and Colaba also recorded moderate and poor levels of O3 (ozone) respectively, which could mean a higher concentration of Nox (oxides of nitrogen) in these areas.  In such an atmosphere, sensitive persons have been adv-ised to avoid prolonged and heavy exertion. Generally, people are recommended to refrain from outdoor activities during the early morning.

The SAFAR has also predicted poor AQI for the city for the next 48 hours.