Faced with paucity of funds and lack of logistical support, a group of wrestlers had set up the akhara. 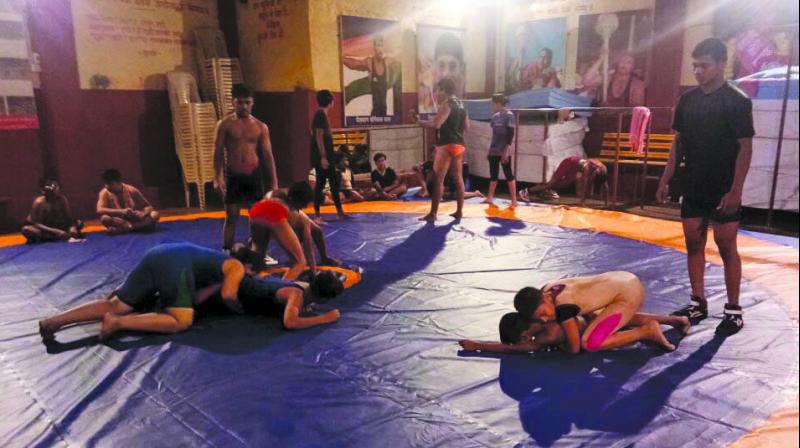 The akhara is also a meeting spot for former wrestlers.

Mumbai: In a country where wrestling-based films like Dangal and Sultan have set cash registers ringing, real-life wrestlers are struggling to keep alive the traditional sport of Kushti.

A small akhara (wrestling arena) carved out of a space provided by the Mira-Bhayandar Municipal Corporation (MBMC) at its community hall in Bhayandar (west) has been slapped with eviction notices last week, more than a decade after paying namesake annual fees to the corporation. Faced with paucity of funds and lack of logistical support, a group of wrestlers had set up the akhara.

The civic administration has claimed that the move was only following the government notification mandating classification of community halls as commercial entities which have to be charged rentals at the prevailing market rates.

National-level referee and trainer Vasant Patil lamented, “Consequently, the manifold hike in rentals is bound to spell doom for institutions like our akhara which is not profit-driven but promotes and encourages this traditional sport.”

An officer attached to the MBMC’s public works department, on condition of anonymity, said, “We are helpless. The notices are in accordance with the rules.”

The akhara, which recently upgraded to the mat system, is not only a small academy imparting free training to young aspiring wrestlers, but also a point of assembly for former wrestlers, a majority of them hailing from the downtrodden section of society.

Rohit Patil, a young wrestler, said, “The main need of a wrestler is proper nutrition, but as most us belong to poor families, we are unable to get a proper diet. Due to limited resources from menial jobs, our trainers somehow manage to maintain the wrestling arena, which has to be regularly treated with herbs, special oils, lime and curd.”

Presently, 75 young mud warriors including 15 girls are enrolled with the akhara, which despite all odds, has produced state-level wrestlers like Sneha Aagwane, and Akshay and Vaibhav Mane.